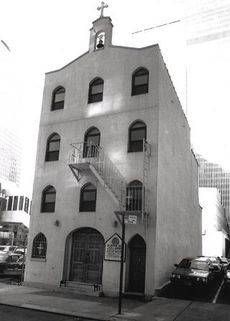 St. Nicholas Greek Orthodox Church is a parish of the Greek Orthodox Archdiocese of America in New York City, which stood at 155 Cedar Street in the City’s financial district, across from the South Tower of the World Trade Center. The church was completely destroyed in the September 11, 2001 attacks when the South Tower collapsed.[1] It was the only non-WTC building to be immediately destroyed by the attacks.

On October 14, 2011, ten years after the church was destroyed, an agreement for the reconstruction of the church was signed to site the new church at 130 Liberty Street, on Port Authority land.

The building that came to house the church was built around 1832. In 1916, Greek American immigrants started the congregation of St Nicholas Greek Orthodox Church and in 1922 started to hold worship services at the Cedar Street location.[2][3] Serving the spiritual needs of the early immigrant community, the church also achieved prominence as a religious and cultural center for Greek shipping magnates passing through New York.

The church building was only 22 feet (6.7 m) wide, 56 feet (17 m) long, and 35 feet (11 m) tall, and was easily dwarfed by the 110 story Twin Towers, which were completed in 1972 and 1973. Despite its small size and unusual location, before the attacks the church had a dedicated congregation of about 70 families led by Father John Romas. On Wednesdays, the building was opened to the public and many people, including office workers from the towers and non-Greek Orthodox, would enter the quiet worship space for contemplation and prayer. 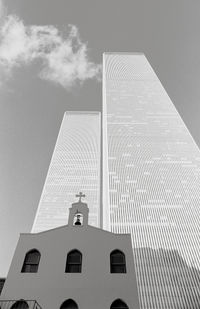 The building was completely buried by the collapse of the South Tower of the WTC. No one was inside when the church was destroyed. The church sexton and an electrician managed to escape only minutes before the tragedy.

A report in a Greek-Orthodox newspaper said that before the South Tower collapsed, part of the airplane's landing gear was seen resting atop the church. Also, body parts were spotted on and around the church before the collapse of the tower, presumably the remains of those who had jumped or fallen from the towers.

Within days, Archbishop Demetrios (Trakatellis) of America traveled personally to Ground Zero, setting foot on the site where the Church of St. Nicholas stood, in order to conduct a memorial service for the victims of those who perished in the attacks and to offer prayers for the families in mourning.[4]

On the Feast Day of St. Nicholas, December 6, the Archbishop, joined by His Eminence Archbishop Iakovos and area clergy, celebrated a somber Vespers and memorial service near where the Church once stood. Six months after the attacks, His All Holiness Ecumenical Patriarch Bartholomew also journeyed to this sacred site and presided at a memorial service with family members of the victims.[4]

Among the church's most valuable physical possessions were some of the relics of St Nicholas, St Catherine, and St Sabbas the Sanctified, which had been donated to the church by the holy and right-believing Emperor Saint Nicholas II, the last czar of Imperial Russia. These relics were removed from their safe on holy days for veneration. However they were never recovered after the attack. To Archbishop Demetrios, the notion that the saints' relics were intermingled in the dust with the remains of the attack victims only serves to sanctify the site further.[5]

Among what was eventually found were the damaged icons of St. Dionysios of Zakynthos and Zoodochos Pege and a handful of miscellaneous religious items.[6][7][8]

Following its collapse, donations of almost $2 million were received, as well as additional pledges of construction materials and appointments for the complete rebuilding of the Church. The city of Bari, Italy, where the relics of St. Nicholas were originally bestowed, donated $250,000. The government of Greece contributed $750,000 to these efforts, and the Ecumenical Patriarchate gave $50,000.[4]

The plans for rebuilding the World Trade Center complex included building a new St. Nicholas Greek Orthodox Church, in a new location at 130 Liberty Street, quite close to the original site.[1] The church would again house a worshiping congregation, and a museum would also be built for the projected large influx of visitors expected to come to the site.

In March 2009, the Port Authority stated it quit talking with the church and canceled building St. Nicholas altogether. The Port Authority claimed that the church was asking for too much, and that they might delay the whole World Trade Center project. The Archdiocese said that they just wanted the church back, and a third of the building would be a memorial for 9-11, and a place where people of all faiths could pray and remember those who died in the attacks.

In July 2010, George Demos, a former SEC attorney and Republican Congressional candidate, first brought the failure to rebuild St. Nicholas Church into the national debate. Demos claimed that the Executive Director of the Port Authority, Chris Ward, had not made the rebuilding of St. Nicholas a top priority.[11] On August 16, 2010, Demos launched a petition on his website calling on the Port Authority to rebuild the church.[12] On August 23, 2010, former New York Governor George Pataki joined George Demos at a press conference to call on the Port Authority to reopen talk with officials from the Church.[13]

During the Vespers service that was held on December 5, 2010, Archbishop Demetrios said that the Greek Orthodox Archdiocese would do anything to rebuild the church.

As a result of settlement discussions mediated by the Governor’s office, the Port Authority and Archdiocese agreed to an independent engineering study to determine the feasibility of siting the Church at various locations in Liberty Park. The four-month study was led by Peter Lehrer, a nationally renowned construction expert, who worked on the project on a pro bono basis with Director of World Trade Center Construction Steven Plate and independent engineers Gorton & Partners and McNamara/Salvia, Inc. The study concluded that structural issues could be resolved to site the Church at 130 Liberty Street at significantly reduced cost compared to the original agreement and with no delay to construction at the World Trade Center site.[16]

The 2008 plan for building a new St. Nicholas Greek Orthodox Church at the corner of Liberty and Greenwich Streets.

Thus on October 14, 2011, ten years after the church was destroyed, an agreement for the reconstruction of the church was signed that ended all legal action, marking a major win for the tiny church:

"On Friday, after a combined feat of political arm-twisting and reverse engineering, Gov. Andrew M. Cuomo; Archbishop Demetrios, the primate of the Greek Orthodox Archdiocese of America; and Christopher O. Ward, the executive director of the Port Authority of New York and New Jersey, announced that the new church would be constructed at Liberty and Greenwich Streets, exactly where it was envisioned three years ago, but on a plot of 4,100 square feet, about two-thirds the size of the site in the earlier (2008) plan.[17]

The new church will rebuild on Port Authority land,[18] and will be constructed on a platform above a spiral ramp to an underground parking area. It will also include a nondenominational bereavement center adjacent to it. The Port Authority estimates that it will spend about $25 million to construct the platform on which St. Nicholas will sit and provide the necessary utility hookups.[17] The church will pay for anything built above ground.[19]

"Father Arey said it was too early to predict whether St. Nicholas would have a dome. “It will look like an Orthodox church,” he said, “while the emphasis will be to be spiritually and contextually harmonious with the neighborhood.” Speaking of the 2001 attack, Father Arey said: “It wasn’t just an act of terrorism. It was an act of religious hatred at some level. Rebuilding the only house of worship destroyed on 9/11 is important for the psyche and the soul of the nation.”"[17]

Archbishop Demetrios said that "our pledge is to be a witness for all New Yorkers, that freedom of conscience and the fundamental human right of free religious expression will always shine forth in the resurrected St. Nicholas Church."[19] 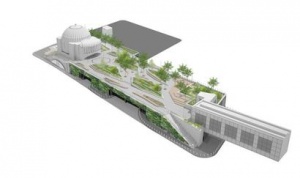 Layout of Liberty Park, with the plan to rebuild St. Nicholas Church at left and pedestrian bridge at right.

On Saturday October 18, 2014, government and church leaders attended a ground blessing ceremony on a concrete platform surrounded by steel foundation beams and orange construction netting.[20][21] Renowned Spanish architect Santiago Calatrava was awarded the task of designing the new St. Nicholas. His plans were influenced by the churches of Hagia Sophia and the Church of the Holy Savior, Istanbul.[22]

In 2015 AHEPA chapters from across the country launched fundraising efforts hoping to raise at least $500,000 over the next two years toward the estimated $38 million project, combining contributions with private gifts and donations from the 525 parishes within the Greek Orthodox Archdiocese of America.[23]