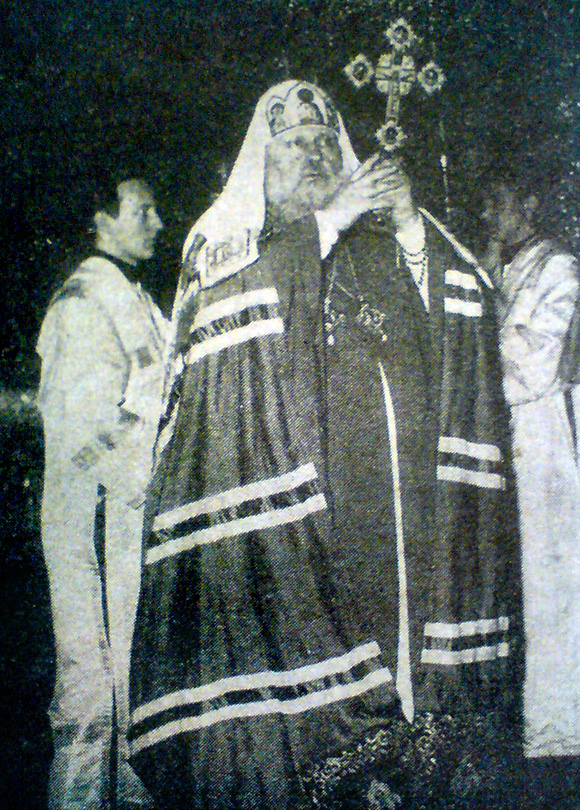 Patriarch Pimen (Russian: Патриарх Пимен), born Sergey Mikhailovich Izvekov (July 23, 1910 - May 3, 1990), was the 15th Patriarch of Moscow and the head of the Russian Orthodox Church.

He was born in the town of Bogorodsk near Moscow. In 1925, Pimen Izverkov became a monk at Bogoyavlensky Monastery in Moscow. He also spent years in various Russian monasteries and cathedrals in Murom, Odessa and Pskov. In 1954, Pimen became head of Troitse-Sergiyeva Lavra.

November 17, 1957 in Odessa he was consecrated bishop of Balta, vicar of the Diocese of Odessa.

Since December 26, 1957 he was bishop of Dmitrov, vicar of the Moscow diocese.

November 23, 1960 he was elevated to the rank of archbishop.

On November 14, 1961 he was appointed Metropolitan of Leningrad and Ladoga. After the death of Patriarch Alexei I Metropolitan Pimen was elected Patriarch Pimen of Moscow and all of Russia in 1971.

Pimen's task thus became to lead a Christian church in a state ruled by an officially atheist Communist party. At his post he worked closely with the authorities: participated in numerous 'peace movement' conferences sponsored by the government. Pimen was awarded the Soviet Peace Fund Medal (1969, 1971) and in 1970 Golden medal "Борцу за мир" ("For Fighter for Peace") by the 'Soviet Committee for the Defence of Peace'. Pimen was member of World Peace Council from 1963 onwards. In 1961, Pimen was awarded Order of the Red Banner of Labour (орден Трудового Красного Знамени), one of the higher rewards of the time. The Soviet state tried to limit and control all religious activity and Pimen tried to struggle just to ensure the survival of the Russian Orthodox Church.

At the end of his difficult term as the head of the Russian Orthodox Church he organized the celebration of the 1000th anniversary of the Baptism of Rus' in Russia in 1988. This event became the historic moment that marked the end of persecution of Orthodox Christianity in the Soviet Union.