Philotheus I (Kokkinos) of Constantinople 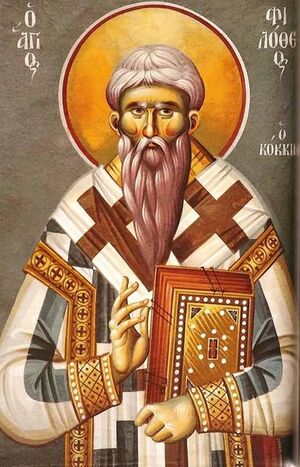 Saint Philotheus I (Kokkinos) of Constantinople

The venerable Philotheus I (Kokkinos) was Patriarch of Constantinople during the fourteenth century, serving as patriarch during two periods: from 1354 to 1355, and from 1364 to 1376. He was an anti-unionist who opposed Emperor John V in his intent to negotiate re-union of the churches with Popes Urban V and Gregory XI. He is commemorated on October 8.

Philotheus' early life is not known. He was a native of Thessalonika and is believed to have been born about the year 1300. His mother was a Jewish convert. He entered a monastic life early, becoming a monk at Mount Sinai and later he became the abbot of the Great Lavra on Mount Athos. At Mount Athos he was a close friend of St. Gregory Palamas and became a follower and advocate of the form of contemplative prayer, Hesychasm.

In 1347, Philotheus was consecrated Metropolitan of Heraclea, in Thrace. Becoming a protege of co-Emperor John VI Cantacuzenus, Bp. Philotheus spent most of his time in Constantinople. In 1354, he was appointed Patriarch of Constantinople by John VI. In 1355, after John V Palaiologus obtained the abdication of John VI and forced him into a monastery under the name Joseph Christodoulus, he then forced the deposition of Patr. Philotheus.

In 1364, Patr. Callistus stepped aside and helped restore Philotheus to the patriarchal throne. In 1376, Patr. Philotheus was deposed by Emperor Andronicus IV, when he ascended to the imperial throne. Philotheus reposed in exile in 1379.

In 1354. the Ottoman Turks gained a foothold in Europe, at Gallopoli, threatening Constantinople from a new side. Threatened anew, John V appealed to the West for help in defending Constantinople against the Turks, proposing, in return, to end the schism between Constantinople and Rome. Opposed to re-union on political terms, Patr. Philotheus was against the efforts by John V to negotiate with Popes Urban V and Gregory XI.

Patr. Philotheus pursued an ecclesiastical policy to consolidate under the jurisdiction of the Constantinople patriarchate the Orthodox churches of the Serbians, Russians, and Bulgarians and to assert a primacy over the entire Eastern Church. He actively intervened in the affairs of Russia such that all the ecclesiastical administrative functions were consolidated under the Metropolitan of Kiev, Cyprian, who resided in Moscow.

Patr. Philotheus was an advocate of Hesychasm, and aided the cause of the Hesychasts in 1368 by supporting the canonization of Gregory Palamas at a local synod.

Patr. Philotheus was a writer of note, writing works on the theology of the Uncreated Energies of God and attacking the scholastic philosophy that was then current in the Western church. His most famous work is the Hagiorite Tome, the manifesto of the Mount Athos monks on how the Saints partake of the Divine and uncreated Light that the Apostles beheld at the Transfiguration of Christ.