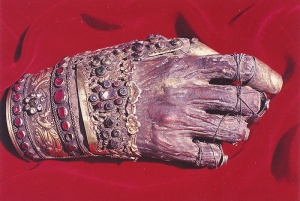 The Monastery of Philotheou (Greek: Φιλοθέου) is one of twenty monasteries on the Mount Athos peninsula and is located on the eastern side of the peninsula. It is twelfth in hierarchical rank among the monasteries. The name of 'Philotheou' is named after its founder, St Philotheos, and is derived from two Greek words which mean 'Beloved of God'. Philotheou functions as a coenobitic monastery.

A commemoration of Seven Venerable Saints of Philotheou monastery takes place on January 24 / February 6. These saints include: Philotheos, master builder of the monastery;[1] Theodosius, Igumen and Metropolitan of Trebizond; Dionysius and Symeon; Dometios the Hesychast; Damianos; and hieromartyr Cosmas of Aetolia, Equal to the Apostles.[2]

Founded by St Philotheos in the last quarter of the tenth century, it was obscure until Serbian and Bulgarian monks settled there between the fourteenth and sixteenth centuries. As the Slav monks left, the monastery again became obscure; until the eighteenth century, when the Greek princes of Moldavia and Wallachia made grants to the monastery, with which the brotherhood had guest quarters, cells and chapels built.

In 1746, the central church was built, and over the next thirty years had fresco's painted, including the Mother of God Glykofiloussa and scenes from Revelation. Additionally, there are ten chapels connected to the monastery, four inside the monastery proper and six outside.

Philotheou possesses the wonderworking icon of the Mother of God Gerontissa, and it's library has 250 manuscript codices and two parchment rolls of the Divine Liturgy. The sacristy contains a piece of the True Cross and the right hand of St John Chrysostom, among other relics.

nb. only those with articles are listed