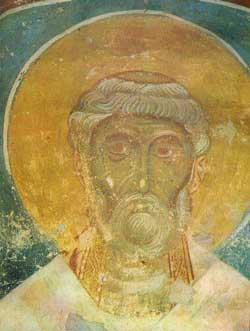 St Peter’s birth and early life is largely known. He is believed to have grown up under the tutelage of Archbishop Theonas, Peter’s predecessor as Archbishop of Alexandria. Peter led the Catechetical School of Alexandria which at the time was the center of theology of the Church. Peter was chosen as the Archbishop of Alexandria in the year 300 upon the death of his mentor, Theonas, who had recommended Peter to the church leaders as his successor.

Three years later, in 303, the persecutions of Roman Emperor Diocletian began. With the rise of the persecutions, Peter established rules in Alexandria for the re-admittance, after appropriate penance, to the church of those who lapsed from the faith. His rules brought opposition from those extremists, led by Meletius, Bishop of Lycopolis, who thought them too lenient. In 306, Peter was forced to leave Alexandria due to renewal of the persecutions by the Romans. During the time he was in hiding, Meletius usurped Peter position as bishop of Alexandria and began to consecrate his followers as bishops, even to sees of standing bishops who were in prison for defending their Faith. Among Meletius’ ordinations was that of Arius, the future heretic, who denied the divinity of Christ. Upon his return to Alexandria, Peter anathematized and excommunicated Arius after he refused to correct his position and submit to the truth.

In 311, Peter returned to Alexandria during a pause in the persecutions, but was soon arrested and sentenced to death. Upon hearing of his sentence, a large number of people, expressing their outrage, assembled at the gate of the prison where he was held. To avoid a riot, with its resulting bloodshed, Peter suggested to the Roman authorities that they secrete him through the back of the prison so he might be taken away secretly to execution. His executioners took Peter from the prison in the dark of night to the place where St. Mark had been martyred and, there, Peter was beheaded. Tradition notes that on that night a pious virgin heard a voice from the heaven declaring, “Peter was the first among the Apostles; Peter is the last of the Alexandrian martyrs.”

During the time of Peter’s life as archbishop he nurtured the Church of Alexandria, seeing it strengthened and grow in spite of the persecutions. After his execution, his people gathered at the place of his death where they collected his body and head and proceeded to the cathedral. At the cathedral they dressed him in his bishop’s vestments and sat him on his throne at the high place in the altar. During his life St. Peter always sat on a footstool next the the throne as he would never sit on it. He once explained he did not dare sit on the throne because whenever he approached his throne he saw a heavenly light shining on it and sensed the presence of a divine power.

St. Peter is known as a great theologian and champion of Orthodoxy. The Councils of Ephesus and Chalcedon consulted passages in his book, On the Divinity (of Jesus Christ). The most widely known and esteemed of his works by the Church are his Penitential Canons.