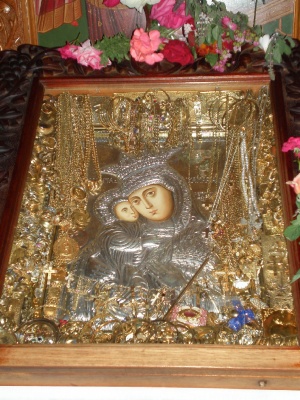 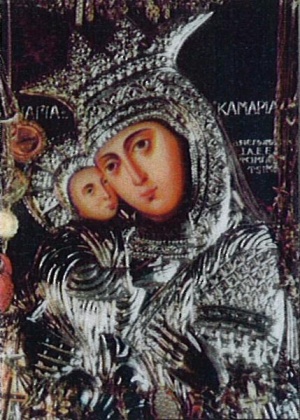 Panagia Kamariani is commemorated by the Church on August 15 and September 8. This icon was discovered in the city of Bodrum (formerly Halicarnassus; Turkish: Halikarnas, Ancient Greek: Αλικαρνασσός), after the Virgin Mary appeared to a Greek family living in this city, in three separate visions. The name "Kamariani" (from Greek kamara, anything with a vaulted or arched cover; a vault, arched ceiling, or roof) was given since they were advised by the Virgin that they would find her icon in a vaulted room beneath their property. The icon is now in Australia.

Representatives of the official monastery for the Panagia Kamariani (Red Hill, Australia) are in the process of documenting the history of this icon.

The holy Monastery of Panagia Kamariani in Red Hill, Victoria, Australia, is under the omophorion of the Greek Orthodox Archdiocese of Australia. The site has an area of 6.3 hectares and is located on the south east corner of Red Hill Road and Prossors Lane in Red Hill, Victoria, Australia. The site has an approximate 144 metre frontage along Red Hill Road and a 306.8 metre long boundary along Prossors Lane. The main entrance into the property is via a double gate entrance on the corner splay. Further into the site is the church, a rectory, and a historical dwelling and shedding. Existing vegetation include strands of cypress trees which assist in providing a visual buffer between the Church and the adjoining properties.

There have been many applications made by the Church to develop and use the property for religious and recreational activities. The first application to develop and use the land was in 1975. The request was to develop an amphitheatre, chapel, toilet facility, exhibition shelter, presbytery, and kiosk (this proposal initially included a soccer field, basketball and tennis courts which were later abandoned). The Church claimed it was traditional to combine religious observance and social outings and over 100 objections were submitted to the Council and the application was refused by the Western Port Regional Planning Authority. The Tribunal, at the time, was prepared to permit the development of the church and presbytery but not the exhibition shelter. Two subsequent applications were lodged which also included parking for 187 cars, these were also refused and unsuccessfully appealed by the Church to the Planning Appeals Tribunal. Each application attracted over 200 objections. A fourth application was lodged in December 1981 for the development and use of the land for a parish church, a toilet block and formalised car parking for 112 cars. In essence, the difference between the fourth application and the previous being the exclusion of the recreational facilities. A Planning Permit was eventually issued on October 1982 and subject to nineteen conditions. The intent of these conditions aimed at restricting the use of the land and to ensure the potential intensity of the use would not become incompatible with the level of amenity enjoyed the local residents at the time.

In 2008, construction of a hall for the public finished, 66 metres to the north of the Church with a size of 30 metres by 25 metres (378 sq. metre). The external facade is a traditional Byzantine stone white finish to match the Church building.

There is a small monastery, situated 3 km outside the village of Megalo Horio, on the island of Tilos (Greece), dedicated to the Panagia Kamariani. An annual feast takes place for Panagia Kamariania on the 23rd of August. During this celebration, the locals dance "the dance of the cup" gathering money for the restoration of the other churches on the island.