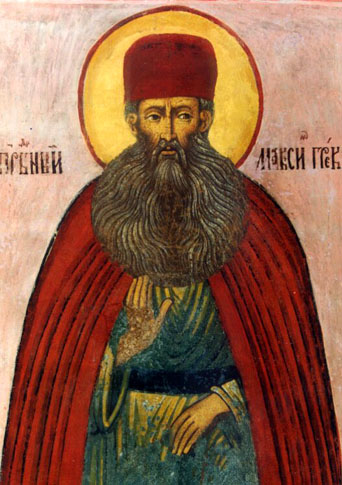 Icon of Saint Maximus the Greek from the Annunciation Church of Yaroslavl.
Our venerable father Maximus the Greek, also known as Maximos the Greek or Maksim Grek (Russian: Максим Грек, c. 1475-1556), was a Greek monk, publicist, writer, scholar, humanist, and translator active in Russia.[1] He is also called Maximos the Hagiorite (Greek: Μάξιμος ὁ Ἁγιορήτης).[2] He is commemorated on January 21.

Maximus was born Michael Trivolis (Greek: Μιχαήλ Τρίβολης, Russian: Михаил Триволис) in 1475 in Arta, Greece.[3][4] As a young man (probably in 1493[4]), Maximus went to Italy to study ancient languages, as well as ecclesiastic and philosophic works. He knew prominent figures of the Renaissance era such as the Venetian printer Aldus Manutius[5] and made the acquaintance of scholars Angelo Poliziano, Marcilio Ficino, Pico della Mirandola, and Janus Lascaris.[4] Maximus was also greatly influenced by the preachings of the fiery Dominican priest and reformer Girolamo Savonarola.[6][7] Upon his return from Italy in 1507, he took monastic vows at the Monastery of Vatopedi on Mount Athos.[8]

In 1515, Grand Prince Basil III asked the abbot of the monastery to send him a certain monk by the name of Savva to translate a number of religious texts. Savva was so old that the abbot decided to send the energetic Maximus instead, though he had no knowledge of the Church Slavonic language. Nevertheless, the monks vouched for him, and he went to Moscow, where he was met with great honor.[9]

Maximus' first major work in Russia was a translation of the Psalter together with the Russian translators (including the scholar Dmitry Gerasimov) and scriveners, which would be solemnly approved by the Russian clergy and the grand prince himself. After Basili III rejected his request to go home, Maximus continued to work on translations and would later create an inventory of the princely library and correct the books for divine service. Observing the "defects" and injustices of the Muscovite life, which had been in direct opposition to his Christian ideals, Maximus began to expose them and criticize the authorities, attracting different people with similar views, such as Ivan Bersen-Beklemishev, Vassian Patrikeyev, and others. With regards to the question of monastic estates, which had already divided all of the Russian clergy into two antagonistic camps (the Possessors and the Non-Possessors), Maximus took sides with Nilus of Sora and his startsy, who headed the Non-possessors camp.[10] This would make him one of the worst enemies of the Josephinians, who stood for the right of the monasteries to own land. Maximus and his followers discussed freely the shortcomings of Russia's internal and foreign policies, criticized the lifestyle of the Russian clergy, exploitation of peasants, and the system of supporting local authorities by "milking" the peasants (the so called кормление, or kormleniye).

During this period of his life (1540), Maximus wrote a manuscript that contains the first reference in Old Russian to the existence of the New World.

Maximus' relations with Vassian Patrikeyev, Ivan Bersen-Beklemishev, and Ottoman Turkish ambassador Skinder, Metropolitan Daniel's hostility towards him, and Greek's own negative attitude towards Basili III's intention to divorce Solomonia Saburova decided his fate. The sobor of 1525 accused Maximus of nonconformism and heresy based on his views and translations of ecclesiastic books, disregarding his mediocre knowledge of Russian and obvious mistakes on the part of the Russian scriveners (his improper use of the imperfect tense was used to imply that he no longer believed the Holy Spirit was the Third Person of the Trinity but only had been temporarily). He was then exiled to the Joseph-Volokolamsk Monastery and placed in a dungeon without the right to correspond. Maximus' "irritating" behavior at the monastery, newly discovered mistakes in his translations, and old suspicions of his unscrupulous relations with the now dead Turkish ambassador were all used against him once again at a new sobor in 1531. Worn out by the harsh conditions of his imprisonment, Maximus acknowledged some minor mistakes in his translations and excessive wine drinking. Finally, the sobor banned him from receiving communion and exiled him to the Otroch Monastery in Tver, where he would spend his next twenty years. The Patriarchs of Antioch, Constantinople, and Jerusalem all attempted to negotiate Maximus' release with the Russian authorities, but to no avail. He himself pleaded with Ivan the Terrible and Metropolitan Macarius for his freedom. Moscow was afraid of Maximus' ability to expose wrongdoings and criticize the powers that be and, therefore, was reluctant to let him go. In 1551 (according to other accounts, 1553), Maximus was transferred to the Holy Trinity-St. Sergius Lavra at the solicitation of some boyars and Hegumen Artemiy of the lavra. That same year, the tsar visited Maximus during his pilgrimage to Kirillo-Belozersky Monastery, who would advise the ruler to take care of the families of those soldiers who died in the process of annexation of Kazan instead of merely praying for the dead. In 1554, Maximus was invited to join a sobor, which would deal with the heresy of Matvei Bashkin, but he refused, being wary of getting entangled in this case. Maximus died in 1556 in Holy Trinity-St. Sergius Lavra, Sergiyev Posad.