Our Venerable and God-bearing Father Luke of Sicily, also Leo Luke of Corleone, Leoluca, Leone Luca or Leo Luke (ca.815/818 - ca. 910/915)[1][2] was the Abbot and Wonderworker of the Monastery of Mount Mula in Calabria, and a founder of Italo-Greek monasticism in southern Italy.[note 1]

Born in the Sicilian town of Corleone, he died about a hundred years later a centenarian, after eighty years of monastic life,[3][note 2] in Monteleone Calabro, now Vibo Valentia, in Calabria. Today he is a patron saint of both towns, and his feast day is celebrated on March 1.[3][4]

Saint Luke was born in Corleone, Sicily in the 9th century AD (c.815 to 818 AD),[1] on the eve of the Saracen invasion of Sicily.[note 3] His parents Leo and Theoktiste baptized him Leo. They were a pious and wealthy family who raised him in the nurture and admonition of the Lord. He was orphaned at an early age when his parents died, and devoted himself to managing the estate and supervising the herds as a shepherd. In the solitude of the fields he realized that he had a call to religious life, so he sold the estate, gave the money to the poor, and went to the monastery of St. Philip in Agira, in the province of Enna, Sicily.[4]

It is not known how long he stayed at the monastery at Agira, but due to the raids of the Saracens, he left from there and went to Calabria.[note 4] Before going to Calabria however, he made a special point of going on pilgrimage to visit the tombs of the Apostles Peter and Paul in Rome.[note 5]

In Calabria, he went to the Monastery of Mula, at Mount Mula (Monte La Mula ), one of the highest peaks of the Orsomarso mountains (1935 m), near Cassano. Here he became a monk, excelling in the virtues and in obedience, remaining there for six years.[4]

Afterwards he departed together with the Hegoumen of the monastery Christopher, and they made their way to the mountainous region of ​Merkourion[note 6] in northern Calabria, in the Pollino area of the Southern Appenines, an important center of monastic settlement which is referred to in several of the Vitae as the "New Thebaid".[5] Here they founded a new monastery, living there in asceticism for another seven years.

Once more they left and moved on to Vena (modern Avena, Calabria) to continue the spiritual struggle for another ten years. Here they built another monastery, which by the time of Hegoumenos Christopher's death had more than one-hundred monks in it. Saint Luke himself lived the solitary life nearby at Mormanno, Calabria.[2]

A little later, after the death of Abbot Christopher, Saint Luke became Abbot of the Monastery of Mount Mula. Here he began new ascetic struggles, and Holy God granted to him the gift of Wonderworking, and many faithful flocked to the holy ascetic to receive his blessing and be healed.[4] The Venerable Luke healed the sick, exorcized demons, raised paralytics, and guided the lost towards the path of salvation. He prayed without ceasing, and remained out in the cold up to twenty days, in order to intensify his ascetic struggle.[4]

It is said that he lived the last days of his life in meditation, fasting and ecstatic raptures. In old age, he called the monks to come to him, and foretold his end. He delegated the responsibility of the position of Hegoumen to the monk Theodore, and assigned the priest Euthymios as his assistant.[4] Having received Holy Communion, the Venerable Luke fell asleep in peace and was buried in the church of the Blessed Theotokos.[4] 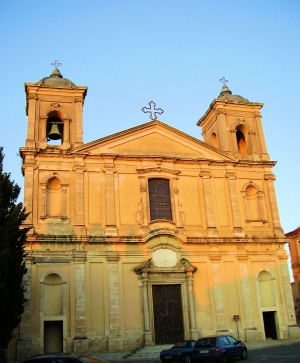 The cathedral of Santa Maria Maggiore and San Leoluca, in Vibo Valentia.[note 7]

News of Saint Luke's death spread slowly to Corleone, and it is only in the 13th century that there is evidence of a church dedicated to him in his birthplace. In 1420 there are also references to a Brotherhood of San Leoluca.[6]

In addition, the apparition of Saint Leo Luke and Saint Anthony is credited with preventing a Bourbon invasion of Corleone on 27 May 1860.[8]

In Vibo Valentia in Calabria, during his feast day on March 1, the local fire brigade pay him homage by placing a crown of flowers at the feet of his statue which is located high on the façade of the Cathedral Church of Santa Maria Maggiore e San Leoluca.

However on Sunday December 10, 2006, the Italian daily newspaper La Sicilia, based in Catania, Sicily, ran a full page story stating that the relics of Saint Leoluca had been found in the municipality of San Gregorio d'Ippona, about 2 km southeast of the city of Vibo Valentia. It stated that they were located in the grotto of the Church of Santa Ruba (La Chiesa di Santa Ruba), and that they were confirmed by paleontological analysis.[9] According to professor Gregorio Vaianella, the church of Santa Ruba was dedicated to 'Our Lady of Health' (Madonna della Sanità).[10][note 8]