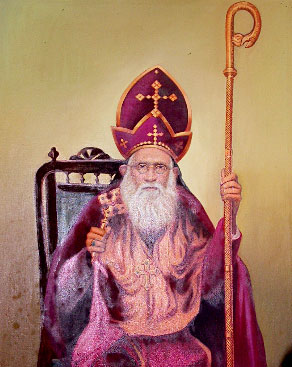 St. Julius was born Antonio Francisco Xavier Alvares on April 29, 1836 to an aristocratic Roman Catholic family in Goa, a small region in India then part of Portugal and now a state of the Republic of India. In 1869 he was ordained to the Roman Catholic priesthood to serve the Roman Catholic Church in Goa. Fr. Julius served in this capacity for 18 years, during that time becoming known for his philanthropy as well as his belief in a Goa free of foreign occupation. His patriotism and work to improve the life of the poor in Goa led to the development of a large following around St. Julius, who eventually left Goa in 1887 for nearby Brahmavar (in the modern state of Karnataka) so that he could serve his flock freely without interference from the representatives of the Portuguese government in Goa.

Conversion to Orthodoxy and consecration

In the same year that St. Julius left Goa he was received into the Syriac Orthodox Church in India by Metropolitan Mar Gregorios of Parumala, later glorified as St. Gregory of Parumala, who also elevated him to the monastic rank of ramban. A year later St. Julius returned to Brahmavar to receive his disciples there into Orthodoxy and organize them as a mission of the Church of India|Malankara Orthodox Church. Although united to Orthodoxy, St. Julius and his followers continued to follow the Roman Rite, thus becoming one of the first Western Orthodox communities to return to the Orthodox Church.

On July 29, 1889 Ramban Alvares was consecrated to the episcopacy as Metropolitan Alvares Mar Yulios of Goa, Ceylon, and India outside Kerala by St. Gregory and Metropolitan Pulikkottil Mar Joseph Dionysius II and returned to continue his missionary labors in Brahmavar, which with the help of a deacon from Kerala soon spread to other parts of what today are the Indian states of Karnataka, Andhra Pradesh, and Maharashtra. After setbacks experienced following the repose of St. Julius, the Brahmavar Mission today consists of a college and five parish churches using Malayalam, Konkani, and Kannada under the Diocese of Chennai (Madras).

In 1892, St. Julius participated in the consecration of an Old Catholic priest from France, Joseph Rene Vilatte, to the episcopacy as Metropolitan Joseph Mar Timotheos. Vilatte was sent to the United States to reconcile Old Catholics and Roman Catholics to the Orthodox Church, but soon separated himself from the Church of Antioch and began single-handedly consecrating bishops for various Old Catholic schisms.

In 1913, St. Julius returned from Brahmavar to Goa, where he suffered a great deal of persecution under the Portuguese. He nonetheless spent the remainder of his life in Goa ministering to its poor, particularly lepers. On September 23, 1923 he fell asleep in the Lord in Panaji, Goa, and was buried in the municipal cemetery of St. Ines. Due to the opposition of the Portuguese government St. Julius did receive any sort of Orthodox Christian funeral.

Although St. Julius' missionary labors had resulted in the development of a sizable Western Orthodox flock in Goa, Karnataka, and Ceylon (modern day Sri Lanka), lack of care from the hierarchy of the Malankara Orthodox Church after the Saint's death led to the eventual disintegration of all these communities, with only the church in Brahamvar, St. Mary's Cathedral, surviving thanks in large part to the service of Fr. Roche Lopez Nuronah, who had been received into Orthodoxy with St. Julius.

In January 1967 St. Julius' tomb was discovered there by Metropolitan Mathews Mar Athanasios. On October 5, 1979 Metropolitan Philipose Mar Theophilos had his relics translated from the cemetery to St. Mary's Orthodox Church in Panaji. In the meantime his old parish in Brahmavar was assigned a new priest in 1986 who replaced its Roman Rite services in Konkani, Kannada, and Latin with West Syrian Rite services in Konkani and Kannada. In 2010, the parish was made the seat of a diocese under Metropolitan Yakub Mar Elias.