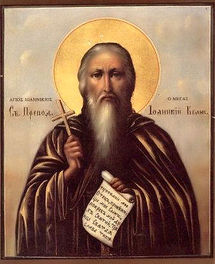 Our venerable and God-bearing Father Ioannikios the Great (also Ioannicius or Joannicius) was an ascetic who lived during the eighth and ninth centuries. He was a great miracle-worker both during his life and after his repose. His feast day is celebrated on November 4.

Ioannikios was born in the village of Marikata in the province of Bithynia in Asia Minor. He was raised by his father Myritrikios and mother Anastasia as a shepherd. As a young shepherd, Ioannikios often retreated into solitude and prayer while tending his sheep. As an adult he was called to duty as a soldier and served with courage, particularly in the wars with the Bulgarians.

After his military service, Ioannikios became an ascetic, withdrawing to Mount Olympus in Asia Minor. There, he was tonsured a monk. Ioannikios lived as an ascetic for over fifty years, traveling to many places during which he received from God the gift of wonderworking. He healed sicknesses, drove out demons, and tamed wild beasts. He was distinguished by overwhelming humility and meekness. His physical appearance was that of a giant - massive and powerful.

Having taken an active part in the destiny of God's Church, he entered the iconoclast controversy, first supporting iconoclasm, but finding himself deceived, he tore himself away from the iconoclast position and became an ardent iconodule who championed the veneration of icons. He enjoyed a close friendship with Patriarch Methodius of Constantinople.  Ioannikios reposed peacefully in the Lord in the year 846, having lived ninety-four years.

This prayer is attributed to St. Ioannikios the Great. It is said that he would repeat a version of this prayer between verses of the Psalms.

My hope is the Father, my refuge is the Son, my shelter is the Holy Spirit, O Holy Trinity, Glory to You.