In light of the proposed European Constitution of 2004, the Orthodox Churches in Europe, along with other European churches had petitioned the European Union (EU) for the inclusion of a clause to formally recognize Europe's Christian heritage. This was done especially to safeguard that heritage and traditional Christian values from the modern threat of militant secularism.[note 1]

Although the draft text of the 2004 Constitution attempted to take these concerns into consideration, in its Preamble and in one of its Articles, nevertheless it did not specifically mention the Christian roots of Europe. The Constitution was signed in October 2004, but was ultimately rejected in referendums by France and the Netherlands in 2005.

After a two-year period, on 23 June 2007, the EU leaders agreed on a detailed mandate for a new Intergovernmental Conference whose task was to draw up a Reform Treaty by the end of 2007. Many parts of the original Constitution of 2004 were set to be included. At the European Council of Lisbon in October 2007, the Reform Treaty text was approved by all 27 EU leaders between 18-19 October, 2007. This treaty carried over the Preamble and the Article from the 2004 text dealing with the status of churches in the member states; however, once again, specific mention of Europe's Christian heritage was not included in the final text.

The official signing of the Reform Treaty by the 27 heads of states and governments took place on 13 December 2007 in Lisbon. Having later been ratified by all 27 of the EU member states, the treaty entered into force on December 1, 2009.[1]

Conclusions of the Inter-Orthodox Consultation on the Draft Constitutional Treaty of the European Union (Herakleion, Crete, 18-19 March 2003)

The undersigned representatives of European Orthodox Churches, gathered in Herakleion of Crete on the 18 and 19 of March 2003, on the invitation of His All Holiness, the Ecumenical Patriarch, and were hosted by the Holy Provincial Synod of the Church of Crete. The Liaison Office of the Orthodox Church to the European Union, under His Eminence, Metropolitan Emmanuel of France, was responsible for the organization of the Conference. Participants included representatives of the Ecumenical Patriarchate, the Churches of Russia, Serbia, Romania, Cyprus, Greece, Poland, Albania, Czechia and Slovakia, and Finland, His Eminence Archbishop Timotheos of Crete and Metropolitans of the Church of Crete, His Excellency Professor of Constitutional Law Evangelos Venizelos, Minister of Culture of the Hellenic Republic as key-note speaker, and a number of jurists and scholars. The proceedings of the Consultation were conducted under the chairmanship of the representative of the Ecumenical Patriarchate, His Eminence Metropolitan Meliton of Philadelphia.

The topic of the consultation was: "The stance of the European Constitution towards the Churches and Religions proposed by the Orthodox Church" as posed in the Letter of Invitation of His All Holiness the Ecumenical Patriarch Bartholomeos: "Hence, the agency in charge of composing and sanctioning the Constitution of Europe finds itself confronted with the need,

a) to specify its position towards the internationally recognized religions and Churches, which include the Orthodox Church;
b) to get itself or the member states of the European Union themselves to specify the criteria and the presuppositions of recognizing the rest of religions as religions and granting them or not the legal benefits that the dominant and traditional religions enjoy in the context of religious toleration, religious freedom and religious detachment of the state; and
c) the criteria of classifying the destructive or criminal organizations which pretend to be religious in the same category and the general principles of dealing with them."

The well-documented presentations, the constructive discussions and the emerging proposals confirmed the need of an Inter-Orthodox consultation on this important issue. The Conference concludes and proposes: 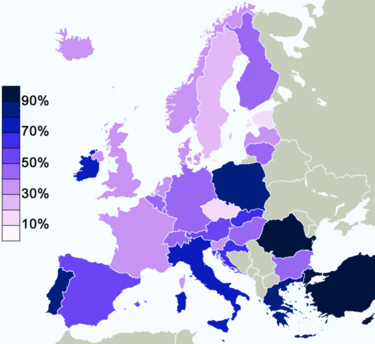 Percentage of Europeans in 2005 in each state who believe in a God. (Graphic includes candidate countries Bulgaria, Croatia, Romania and Turkey, as well as Iceland, Norway and Switzerland.)

Although Christianity is the largest religion in Europe, the EU is a secular body, with a separation of church and state. There are no formal ties to any religion and no mention of religion in any current or proposed treaty.

Of the Union's 27 states, only five have an official state religion, these being Cyprus (Cypriot Orthodox Church), Greece (Church of Greece), Denmark (Danish National Church), Malta (Roman Catholic Church) and England and Scotland in the UK (Church of England and Church of Scotland). Some other churches have a close relationship with the state.[3][note 2]

In 2006 the Russian Orthodox and Roman Catholic Churches confronted Secular Humanism at the conference "Giving a Soul to Europe" (Vienna, May 3-5, 2006),[note 3] discussing the challenges facing Christianity, specifically materialism, consumerism, agnosticism, secularism and relativism, all based on liberal humanist ideology, constituting a real threat to Christianity today.[note 1]

In the secularising EU, the Vatican has also been vocal against a perceived "militant atheism", this being based this on a number of events, including the rejection of Christian religious references in the Constitution and Treaty of Lisbon.

In another highly charged case, in November 2009 the European Court of Human Rights ruled against the use of crucifixes in classrooms in Italy, prompting a backlash from the Vatican, the Church of Greece, the Church of Russia and others;[note 4] Cardinal Walter Kasper affirmed a few days later that: "Our enemies today are not other confessions, but secularism and godlessness."[4]

On 28 January 2010, the Italian government lodged an appeal to the Grand Chamber of the Court, and by March 2010, the case was referred to Court's Grand Chamber.

As part of the proceeding the Governments of Armenia, Bulgaria, Cyprus, the Russian Federation, Greece, Lithuania, Malta, and the Republic of San Marino filed a joint submission as a third-party intervener in the case of Lautsi v. Italy (Application no. 30814/06) in the European Court of Human Rights (ECHR), arguing that: a) the cross was a symbol deeply ingrained in their respective heritages; b) that to extend the values of a secular State to the whole of Europe would represent the “Americanisation” of Europe in that a single and unique rule and a rigid separation of Church and State would be binding on everyone; and c) that the Chamber's reasoning in the earlier judgement had been based on a misunderstanding of the concept of “neutrality” with “secularism.”[note 5]

The Grand Chamber of the European Court of Human Rights (ECHR) ruled on March 18, 2011 by a majority (15 votes to two)[5] that there was no violation of Article 2 of Protocol No. 1 (the right to education) and no separate issue under Article 9 (the rights of freedom of thought, conscience, and religion) to the European Convention on Human Rights, thus upholding the display in public places of religious and cultural symbols.[6][7][note 6]

Since the November 2009 case above, cases have abounded in which the state has sided with individuals clamouring to expunge religious symbols, holidays, prayer and even Christian conscience from public life.[8] In 2012, actions by the British government elevated state-sponsored religious intolerance to a new level, as the coalition government of David Cameron declared that citizens have no right to wear a cross around their necks at work and can be required to remove their cross if ordered by the boss, resulting in dismissal if they refuse.[8] The case (Eweida v British Airways plc) has been taken to the European Court of Human Rights, which is to decide on whether the right to wear a cross is protected under Article 9 of the European Convention on Human Rights:[9]

However the authorities insisted that since wearing the cross is not a “requirement of the faith” it does not fall under the remit of Article 9.[9] Ultimately, in January 2013 the European Court of Human Rights (ECHR) ruled that British Airways violated employee Nadia Eweida's right to freedom of religion by firing her for wearing a crucifix at work, with the Strasbourg court awarding the Coptic Orthodox Christian 32,000 euros in compensation.[10][11] Nevertheless the court rejected discrimination cases by three other Christian claimants.[12][note 7]

Actual wording of the Lisbon Treaty 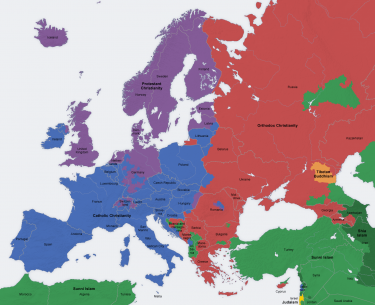 The Treaty on European Union (Maastricht Treaty, 1992) shall be amended in accordance with the provisions of this Article.

PREAMBLE
1) The preamble shall be amended as follows:
(a) the following text shall be inserted as the second recital:

"‘DRAWING INSPIRATION from the cultural, religious and humanist inheritance of Europe, from which have developed the universal values of the inviolable and inalienable rights of the human person, freedom, democracy, equality and the rule of law,’;" [13]

The Treaty establishing the European Community (Treaties of Rome, 1957) shall be amended in accordance with the provisions of this Article.

1) The title of the Treaty shall be replaced by ‘Treaty on the Functioning of the European Union’.

‘Article 16 C
1. The Union respects and does not prejudice the status under national law of churches and religious associations or communities in the Member States.
2. The Union equally respects the status under national law of philosophical and non-confessional organisations.
3. Recognising their identity and their specific contribution, the Union shall maintain an open, transparent and regular dialogue with these churches and organisations.’.[14]

Why no reference to God

In an official press release the Union answered various questions about the Constitution, including the reason why the reference to God was not included in the final text of the Constitution:

In some countries, the national constitution traditionally contains a reference to God. When the 'Constitution for Europe' text was being drafted and negotiated, some governments said they wanted it to include a reference to God or to the Christian tradition of the Union. Others, defending the secular nature of the State and its neutrality with regard to different religions, didn't want any specific religion to be named in the text of the European Constitution.

In its preamble, the Constitution recognises that the EU draws inspiration from Europe's cultural, religious and humanist inheritance. This wording is neutral and appropriate. Indeed, any reference to individual religions could be seen as causing division between European citizens.

In addition, Article I-52 of the Constitution obliges the Union to engage in an open, transparent and regular dialogue with churches and religious associations, just as it does with civil society.

Finally, the Charter of Fundamental Rights now enshrined in the Constitution lays down that everyone has the right to freedom of thought, conscience and religion (Article II-70).[15]