From OrthodoxWiki
(Redirected from Dormition of the Theotokos)
Jump to: navigation, search 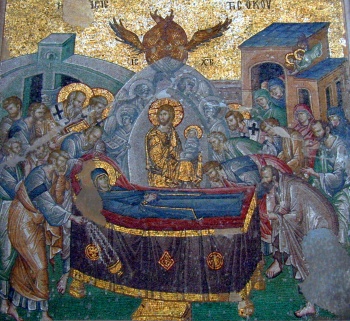 The Dormition (Falling Asleep) of the Theotokos is one of the Great Feasts of the Orthodox Church, celebrated on August 15. The Feast of the Dormition, which is also sometimes called the Assumption, commemorates the death, resurrection and glorification of Christ's mother. It proclaims that Mary has been "assumed" by God into the heavenly kingdom of Christ in the fullness of her spiritual and bodily existence.