This article is for the diocese created in 2019. For the bishopric called “Bukoba” between 1992 and 2007, see Archdiocese of Mwanza. 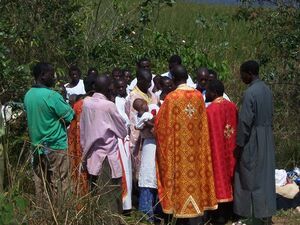 The Holy Diocese of Bukoba is a diocese under the Archdiocese of Mwanza of the Patriarchate of Alexandria.

Bukoba is a city on the shore of Lake Victoria in Northwestern Tanzania, almost bordering Uganda and serving as capital of the Kagera region. It was also the heartland for the Haya people, one of Tanzania's largest tribes before the 20th century and present in that region for roughly two thousand years. Bukoba was a port village serving as radio station under German East Africa (1885–1918), which favored the Haya over the other tribes of the region. In 1915, during the First World War, Britain sent from Kenya its army in order to destroy the city. After conquering Bukoba from the Germans, the British sacked and burned down the city and tortured its inhabitants. The aftermath of the Battle of Bukoba was its abandonment.

The city slowly grew by itself over the following years. After Tanzania's independence in the 1960s, the Hayan dynasties lost their recognition as kingdoms by the government, which further deteriorated the development of the region. In the following decade, Bukoba would be again threatened, this time by Uganda. The Ugandan government invaded northern Kagera in October 1978, looting the villages north of Bukoba and annexing them to Uganda. In the same month, Ugandan aircraft bombed the city of Bukoba. Bridges were exploded, and 1,500 civilians were killed during the invasion. Although Kagera was liberated on January 1959, Tanzania counter-invaded Uganda, and the Uganda–Tanzania War would only end in June.

The suffering Lake Victoria was divinely chosen to become the center of Orthodox Christianity in Africa. In 1924, a group of Ugandans headed by Christopher Spartas (1900–1982), future Bishop of Nilopolis, and Theodoros Nankyama (1924–1997), future Archbishop of Kampala, headed to Alexandria to learn about the Ancient Faith. The first ecclesiastical structure to incorporate East Africa (Tanzania, Uganda, Rwanda, Burundi and Kenya) was the Archdiocese of Irinoupolis in 1958 (seated in Dar es-Salaam, Tanzania). In 1971, the missionary archdiocese was moved to Nairobi in Kenya.

Father Sosthenes Kiyonga (19??–2020) was the first Tanzanian Orthodox priest and, although it's unknown when he was ordained, he is known to have reached the outskirts of Bukoba in 1974. He, being a man of prayer and having seen that the locals had to walk eight kilometers to fetch water, cried out to the Lord about the situation, and a water spring miraculously appeared in the village. Many Pagans, Catholics and Protestants alike saw that miracle and begged to be baptized into the Church. This was later told by the locals to Dr. Stephen Hayes in 1995 for his thesis.

Even before that, Mwanza, in the southern shore of Lake Victoria, had already had contact with Orthodoxy in the 1960s when a Greek factory worker was asked by his fellow employee what his religion was. After hearing about Orthodoxy, the local contacted Father Theodoros Nankyama, who was then serving in Southern Uganda. In Mwanza, Fr. Theodoros baptized twenty catechumens.

In 1992 the Diocese of Bukoba, focused on the missions in Western Tanzania, was founded, having His Eminence the then-Archimandrite Jonah Lwanga as its first bishop. He himself had come from an Ugandan Orthodox family. In 1997, Bishop Jonah was elevated to the Archdiocese of Kampala and Bishop Porphyrios (Skikos), now Archbishop of Thebes, was elected Bishop of Bukoba. After his resignation from active service in 1999, Father Ieronymos Muzeeyi succeeded him, and started the construction of new churches and a seminary. In 2007, the diocese was elevated to archdiocese and had its seat moved to Mwanza, this because Mwanza had now ten times the population of Bukoba.

The see of Bukoba was reestablished by a Patriarchal and Synodal Decree of His Beatitude the Patriarch Theodoros II of Alexandria on October 9, 2019, together with the Diocese of Eldoret in Kenya. The seat of Bukoba, under the omophorion of His Eminence Ieronymos of Mwanza, is still vacant to this day, currently being served by His Grace Agathonikos (Nikolaidis), Bishop of Arusha in Central Tanzania.