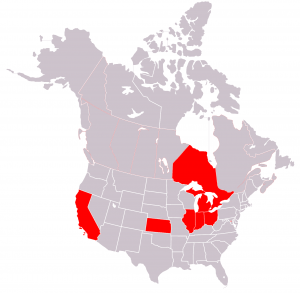 Visual representation of the Bulgarian Diocese

The Orthodox Church in America Bulgarian Diocese is one of three ethnic dioceses of the Orthodox Church in America (OCA). Its territory includes parishes, monasteries, and missions located in six states in the United States, as well as one province in Canada – California, Illinois, Indiana, Kansas, Michigan, Ohio, Ontario, and Washington, D.C. Until his repose on June 17, 2007, the archbishop of the Bulgarian Diocese was the Most Reverend Kyrill (Yonchev), who also served as the Bishop of Pittsburgh and Western Pennsylvania.

On October 4, 2011, the members of the Holy Synod of Bishops of the Orthodox Church in America elected Archimandrite Alexander (Golitzin) to the vacant See of Toledo and the Bulgarian Diocese. On Saturday, May 5, 2012 he was consecrated Bishop of the diocese during a Hierarchical Divine Liturgy at Saint George Orthodox Cathedral in Rossford, OH.

Begun in 1965 as the Bulgarian Diocese in Exile, the diocese was originally under the jurisdiction of the Russian Orthodox Church Outside Russia. It had its origins in the decision of Metropolitan Andrei (Petkov) of New York, then head of the Bulgarian Eastern Orthodox Diocese of the USA, Canada and Australia (named at that time the Bulgarian Diocese of North and South America and Australia), to regularize his relations with his mother church, with whom he had broken after World War II and subsequently was elected to the rank of metropolitan.

In the late 1950s, Andrei petitioned to be accepted into the Russian Metropolia but had been rebuffed by them for unclear reasons, so in 1964 he petitioned and was approved by the Holy Synod of the Church of Bulgaria to be readmitted to the Bulgarian episcopacy and continued to lead Bulgarian Orthodoxy in America. One of his clergy, Archimandrite Kyrill (Yonchev), disagreed with his decision and was consecrated by the bishops of the ROCOR to serve as head of the Bulgarian Diocese in Exile. He had "considerable success in persuading several Bulgarian parishes to accept his authority, due in part to Metr. Andrei's advanced age" (Surrency, p. 95).

In 1976, Bp. Kyrill and his diocese broke from the ROCOR and joined the OCA, thus creating its Bulgarian Diocese.