The Book of Kells is one of many Gospel manuscripts written from the late sixth century to the early ninth century in the monasteries in Scotland, northern England, and Ireland. The Book of Kells was produced late in this period, perhaps around the beginning of the ninth century, and represents the high point in writing these artistic manuscripts. The manuscripts have been grouped by scholars based upon similarities in artistic style, script, and textual traditions. Among other surviving examples of this Biblical style are the Cathach of St. Columba, the Book of Durrow, the Durham Gospels, Lindisfarne Gospels, and the Macregal Gospels.

The name for the Book of Kells come from the Abbey of Kells in Kells, County Meath in Ireland where it was kept between about the eleventh and seventeenth centuries. It remained there when the abbey was dissolved in the twelfth century and made into a parish church. In 1654, the book was moved to Dublin for safekeeping when Cromwell’s cavalry was quartered in the church. In 1661, the book was presented to Trinity College in Dublin where it has remained. The book has been re-bound a number of times and exists today in four volumes after a re-binding in 1953. 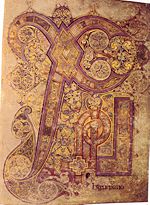 Book of Kells: Folio 34r contains the Chi Rho monogram. Chi and Rho are the first two letters of the word Christ in Greek.

The place, or places, where the Book of Kells was created is not known. Traditionally, it is thought the book was begun in the time of St. Columba in the sixth century. Based upon palaeographic evidence involving the style of script used in writing the book, it appears the manuscript was written after St. Columba’s death, thus discounting the traditional premise. Among the theories of its creation is that it was begun in Scotland, possibly at Monastery of Iona, and then brought to Kells Abbey when the monks of Iona moved to Kells to escape Viking raids at Iona. Since the book is not finished other possibilities about its creation have risen: such ideas as that creation of the book continued at Kells or not.

The book contains the complete texts of three of the synoptic Gospels: Matthew, Mark, and Luke. The Gospel of John ends with John 17:13. The whereabouts of the missing pages of John as well as any missing pages of the preliminary matters section in the book is not known. These may have been lost when the book was stolen in the eleventh century. The text is not marked by chapters, following the practice of the early centuries. Whether this is because the manuscript was not completed is also not known.

The text of the book is accompanied by full pages of detailed artwork, in a broad palette of colors. However, no gold or silver leaf was used. Numerous illustrations are used, including icon like miniatures. Each page is covered with illustrations, and opening words of each Gospel are decorated lavishly, often to the extent that the text is almost illegible.

The book was produced for liturgical use and not as an instructional volume. It is probable that the reader during services would recite from memory rather than read from the text in the book, as the design of the book seems to take this purpose of the book in mind, that is, one that looks good rather than being useful. Also, the book contains many uncorrected mistakes and discontinuities in writing the text so as to avoid disrupting the artistic look of the pages.