From OrthodoxWiki
Jump to: navigation, search
This article or section needs a cleanup to bring it to a higher standard of quality. Recommendation:
Convert to OrthodoxWiki
More detailed comments may be noted on the talk page. You can help OrthodoxWiki by editing it, especially to conform to the Style Manual and the suggestions in How to write a great article.

Didymos was born on October 29, 1920, the son of Ittyavira Thomas of Chiramel-Mulamootil House in Nedumbram near Thiruvalla and Sosamma of Chiramel House in Mavelikara. He joined the Tabor Dayara in Pathanapuram in 1939 where he completed his high school education. He passed his Intermediate from C.M.S College, Kottayam in 1945, his B.A from National College, Tiruchirapalli in 1951, his B.T from Maston Training College, Chennai in 1954, and his M.A from Christ Church College, Kanpur in 1961.

He started his service to the Church as a monk when he was a teenager. He was called to the monastic life by the late Metropolitan Mar Dionysius of Niranam. The Malankara Orthodox Syrian Church has a tradition of selecting bishops from the monastic ranks, but due to period when there were no functioning monastic communities, this tradition could not always be followed. Mor Didimos is an exemption to our recently fabricated monasticism as a preparation to receive the episcopate. 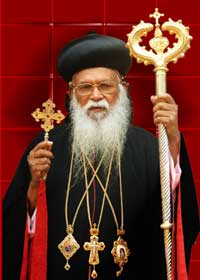 CATHOLICOS OF THE EAST

He completed his training for priesthood under the guidance of Thoma Mar Dionysius and Baselios Augen, Catholicos of the East. He received the order of Korooyoby from Geevarghese II Catholicos of the East on March 11, 1942, his full deaconship on May 22, 1947 and priesthood on January 25, 1950. He served as headmaster of Ponnayya High School, Thiruchirapalli and St. Stephen's High School, Pathanapuram, as Professor of English in St. Stephens College Pathanapuram, and as President of the Orthodox Youth Movement.

On May 16, 1965, Moran Mar Baselios Ougen I made him Ramban. The Malankara Syrian Christian Association, which met on December 28, 1965 at M.D Seminary, Kottayam, elected him to the office of Metropolitan. Didymos was consecrated as Bishop on August 24, 1966 and has been serving as Metropolitan of the Malabar Diocese of the church.

Since being elevated to the Catholicate, has brought about positive changes throughout the church. He has been the first Catholicos to preside over an official church secretariat, which helps keep the administrative affairs of the church running efficiently. He also has plans to renovate the Catholicate Headquarters and bring it up to par with modern times and technology. He has encouraged unity in worship and discipline in all parishes. He has also made extensive Apostolic visits to the church's diaspora, tending to his flock in other regions.