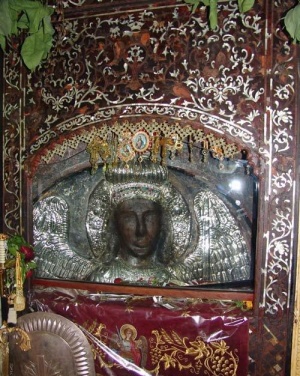 Icon of Arch. Michael the "Mantamados" 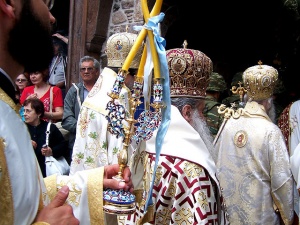 Procession at the church of Mandamados on Lesvos, Greece, during the religious festival dedicated to the Taxiarchis Michael.

Archangel Michael of Mantamados (Gr. O Μανταμάδος) refers to a miraculous icon of the Archangel Michael on the island of Lesvos and is one of the four miraculous icons of the Archangel in the Dodecanese of Greece. The monastery is known locally as Taxiarches (the "Archangel") and the feast of the icon is celebrated on November 8 (the Synaxis of the Bodiless Powers) and September 6 (the Miracle at Colossae).

There are two accounts surrounding the date of this icon, one having to do with the Ottoman Turkish occupation and destruction of 1462, and the other with Saracen pirates during the 9th and 10th centuries during which the entire island was invaded.

In either case, the story of the creation of the icon shares the theme that the target of the raids was the monastery of the Taxiarchis. The pirates threatened the monks with death if they would not reveal the whereabouts of the hidden villagers. The monks refused and the invaders slaughtered all of the monks except for one novice-monk [1]

As the pirates where leaving, the novice climbed to the roof of the monastery to be sure that the pirates had left. However, the pirates noticed him from afar and returned to kill him as well. It is at this point in the story that the Archangel Michael makes his appearance in front of the Saracens with his own sword drawn forcing them to retreat in terror[2]. Thanks to this miracle from the Archangel the monk survived and descending to the courtyard buried the bodies of his fellow brotherhood.

The monk still in deep respect and reverence for having witnessed the Archangel Michael in all his fury, gathered up the earth that was red by the blood of the martyred monks and shaped it into the icon-sculpture of the Archangel as it is today; while it was still vivid in his memory. According to legend, the monk did not have enough of this dirt-blood mix and so the head of the Archangel has turned out disproportionately larger to the rest of his body.

This icon, is now kept within the interior of the church. Many islanders claim to have had personal experiences of miracles being granted for them by Mantamados. This is evident by the numerous cabinets full of tagmata (gifts) to the Archangel housed inside the church. To this day, pilgrims to this church have mixed emotions regarding this icon. At times, the expression on the icon can appear severe, sad, or happy, according to the message that the Archangel wants to convey to that pilgrim or the faithful. This is the tradition of the much-celebrated icon of Mantamados. 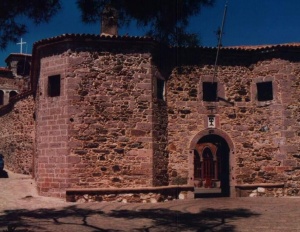 Monastery of Mantamados
On the island of Lesvos, one can visit this miraculous icon at the Byzantine Monastery of the Taxiarchis (Archangel) Michael in the district of Mantamados. This monastery is situated in the northeast part of Lesvos, 36 km from Mytilini. The history of this monastery and the icon are closely connected to the history of the island of Lesvos.

This is a famous monastery, made of stone. The monastery was most probably abandoned in 1462 the year of the island’s occupation by the Ottoman Turks. In the past, the monastery functioned as a men’s convent and is first mentioned in a 1661 ecclesiastical document. The small church within the monastery originally dates from the 17th century but was replaced by larger church in the 18th century. The present church (cathedral) was constructed in 1879 and follows a three-aisled basilica architectural type. The monastery is structured para-metrically around this church.

Hail, Michael, great chief commander with all the hosts of heaven!