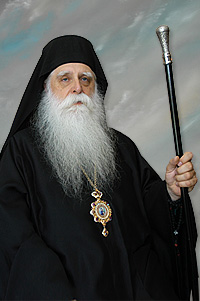 His Grace, the Right Reverend Varlaam (Novakshonoff) of Vancouver was a retired bishop of the Orthodox Church in America. He partnered in the founding of the "New Ostrog" Monastery in Vancouver, Canada during the late twentieth century.

Bishop Varlaam was born Basil (Vasili) Novakshonoff. After visiting the monasteries of Mount Athos, Basil founded, with Lev Puhalo, the Monastery of All Saints of North America in the Province of British Columbia, Canada in 1968. The initial site of the monastery was east of Rosedale, BC, with very primitive facilities.

During the early days of the monastery Basil continued working at a library to finance both the monastery and its missionary work. As part of their missionary endeavors, Basil produced translations and conducted symposiums. Among the early translations were Life of St. Theophil the Fool for Christ of the Kiev Caves, and the Life of St. Xenia of St. Petersburg which were published by Holy Trinity Monastery in Jordanville, New York.

In 1973, the monastery moved to better facilities in Chilliwack, BC. After Lev was ordained to the priesthood in 1981, and tonsured a monk with the name Lazar, he tonsured Basil a monk with the name Varlaam. In 1983, Bishop Ireney of New Gracanica ordained the monk Varlaam to the priesthood to serve the monastery parish. In 1985, Fr. Varlaam answered an appeal from the new English language parish of St. Nicholas in Langley, BC to serve as their priest. Fr. Varlaam also started a small candle factory to make beeswax candles that were difficult to find in their area.

In late 1991, the fathers moved the monastery to new property in Dewdney, BC with a large main building and continued the name Orthodox Monastery of All Saints of North America on the property that Bp. Lazar called New Ostrog after the monastery in Montenegro. The monastery also came under the jurisdiction of the Ukrainian Orthodox Church (Kiev Patriarchate) whose Patriarch Volodymir consecrated Fr. Varlaam Bishop of Vancouver on April 1, 1994. In 2003, the monastery and its clergy, including Bp. Varlaam as a retired bishop, was received into the jurisdiction of the Orthodox Church in America.

July 31, 2007 Bishop Varlaam released from duties at St. Nicholas Church, Langley, BC, Canada. He remains a member of the Monastery of All Saints of North America, Dewdney, BC, Canada[[1]].