The Fathers believed that Scripture had different levels of meaning, which included the literal or historical sense of the text, but could also have an allegorical meaning, or a typological meaning. A text also has a tropological or moral sense, and an anagogical or mystical sense. That a text had an allegorical or typological meaning did not negate the historical sense of the text, it was simply another way of understanding the text.[1]

Typological interpretations of Old Testament events and persons saw them as prefigurations of the events of Christ's life, or other aspects of the New Testament. We find this approach expressed by the Apostle Paul in Colossians 2:16-17: "Therefore do not let anyone judge you by what you eat or drink, or with regard to a religious festival, a New Moon celebration or a Sabbath day. These are a shadow of the things that were to come; the reality, however, is found in Christ." It also finds expression in the Epistle to the Hebrews, and in other Epistles.

One example of typology is the story of Jonah and the whale from the Old Testament. Typological interpretations of this story hold that it prefigures Christ's burial, the stomach of the fish being Christ's tomb: as Jonah was freed from the whale after three days, so did Christ rise from His tomb after three days, see also Matthew 12:38–42, Matthew 16:1–4, Luke 11:29–32. Indeed, Jonah called the belly of the fish "Sheol," the land of the dead.

Other examples of types in the Bible:

Genesis, chapters 37 through 50, brings us the story of Joseph in Egypt. Joseph is commonly cited as a Christ type in the story.[2] Joseph is the only son (at that time) of his mother and a very special son to his father. From his father's perspective Joseph dies and then comes back to life as the ruler of Egypt. Actually Joseph's brothers deceive their father by dipping his coat in the blood of a sacrificed animal. Later Joseph's father finds that not only is Joseph alive but he also is the ruler of Egypt who saves the world of his day from a great famine. Other parallels between Joseph and Jesus include, both are betrayed for silver, both are falsely accused and face false witnesses.

Moses, like Joseph and Jonah, undergoes a symbolic death and resurrection. Moses is placed in a basket and floated down the Nile river, and then is drawn out of the Nile to be adopted as a prince. The baby Moses was under a death sentence. Interestingly, floating the body down the Nile river was part of an Egyptian funerary ritual for royalty.[3]

Genesis Chapter 22 brings us the story of the preempted sacrifice of Isaac. God asks Abraham to sacrifice his son Isaac to Him, cited as a foreshadowing of God sacrificing His Son. When a suspicious Isaac asked his father, "Where is the lamb for the burnt offering?" Abraham prophesied, "God himself will provide the lamb for the burnt offering, my son." And indeed a ram caught by its horns awaited them. In the larger picture Christ is ultimately the lamb Whom God provides for the sacrifice in this typology.

In the New Testament, Jesus actually invokes Jonah as type: "As the crowds increased, Jesus said, 'This is a wicked generation. It asks for a miraculous sign, but none will be given it except the sign of Jonah' " (Luke 11:29). In the Old Testament Jonah told the men aboard the ship to sacrifice him by throwing him overboard. Jonah told them that by taking his life, God's wrath would pass and the sea would become calm. Jonah then spends three days and nights in the belly of a great fish before he is spit up onto dry land. This parallel to Jesus' three days and nights in the grave for the typology.

The Jewish Tabernacle is commonly seen as a series of complex types of Jesus Christ: for example, Jesus describes himself as "the door"[4], and the only "way" to God [5], represented in the single, wide gate to the tabernacle court; the various layers of coverings over the tabernacle represent Christ's godliness (in the intricately-woven inner covering) and his humanity (in the dull colouring of the outside covering)[6]

Distinction between Typology and Allegory 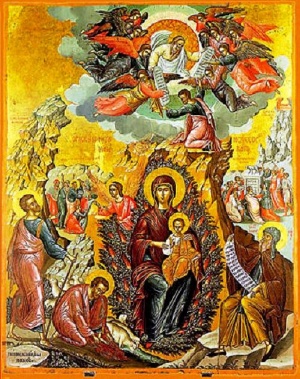 The Theotokos with the Burning Bush. (Damaskinos, 16th c.)

Allegory, on the other hand, finds hidden or symbolic meaning in the Old Testament, which is inherent in text and does not depend on a future historical fulfillment; for example, I Corinthians 9:8-10 sees the law forbidding the muzzling of an ox while it treads the corn as having the hidden meaning that a minister of the Gospel should be supported by the people he ministers to. The Song of Solomon is also often interpreted as an allegory of God (the Lover), and His love for His people (the beloved). The allegorical approach also often sees multiple correspondences in a given narrative which illustrate some point. For example, St. Paul explicitly uses allegory in Galatians 4, in which he sees the child of the slave woman (Hagar) as representing those under the Law, while the child of the free woman (Sarah) as representing those under the New Covenant, and the casting out of Hagar and Ishmael as representing the inferiority of the Old Covenant to the New (Galatians 4:21-31).