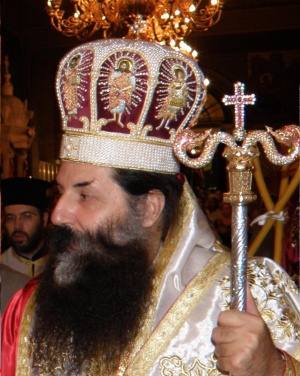 His Eminence Metropolitan Seraphim (Mentzelopoulos) of Piraeus (b.1956 in Athens) is the current metropolitan of the Metropolis of Piraeus, consecrated on January 21, 2001.

Seraphim has studied Economics and Theology and received a license to practise law. He was tonsured a monk at the Holy Monastery of Pentelis and was elevated to deacon and presbyter by Archbishop Seraphim of Athens in 1980.

In December 2000, the Ecumenical Patriarch of Constantinople, and the Holy Synod, elected him as Bishop and assistant to His Eminence Archbishop Stylianos (Harkianakis) of Australia. He was responsible for the Third Archdiocesan district of South Australia and the Northern Territory serving until 2002.

In 2009 Metropolitan Seraphim was one of six bishops who signed the manifesto A Confession of Faith Against Ecumenism.

In December 2010 he made strongly anti-Semitic remarks in a televised interview. Among the opinions expressed, the Jewish Telegraphic Agency reported that he said "that there is a conspiracy to enslave Greece and Christian Orthodoxy. He also accused international Zionism of trying to destroy the family unit by promoting one-parent families and same-sex marriages."[note 2] He also stated that "Adolf Hitler was an instrument of world Zionism and was financed from the renowned Rothschild family with the sole purpose of convincing the Jews to leave the shores of Europe and go to Israel to establish the new Empire."[note 3] He also expressed the belief that "Jewish bankers like Rockefeller, Rothschild and Soros control the international banking system that controls globalization."[note 4] Subsequently, the Greek Orthodox Archdiocese of America, while not mentioning Metropolitan Seraphim by name, condemned anti-Semitism in clear terms which clearly had his eminence in mind: "the Holy Archdiocese of America condemns any such language, and expresses its sadness that these hurtful words should have been spoken at all. The Greek Orthodox Archdiocese of America considers the remarks to be gravely offensive and totally unacceptable."[note 5] (See also Eastern Orthodoxy and Judaism.) In response, Metropolitan Seraphim released a statement of clarification. In it, he said that his comments are strictly his own personal opinion and that he loves and respects the Jewish people.[note 6] He said also,

3. My public vehement opposition against International Zionism refers to the organ that is the successor of the "Sanhedrin" which altered the faith of the Patriarchs, the Prophets and the Righteous of the Jewish nation through the Talmud, the Rabbinical writings and the Kabbalah into Satanism, and always strives vigorously towards an economic empire set up throughout the world with headquarters in the great land beyond the Atlantic for the prevalence of world government and pan-religion.

4. I consider like any sane person on the planet the Nazi regime and the paranoid dictator Adolf Hitler as horrible criminals against humanity and take a stand with all honor and respect against the Jewish Holocaust and any other heinous genocide such as that of the Pontic Greek and Armenian people. Besides, the Greek nation mourns thousands of martyrs from the criminal Nazi atrocities.[note 7]