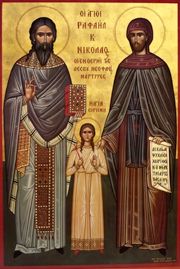 The holy, glorious and right-victorious New Martyrs Raphael, Nicholas and Irene suffered martyrdom by the Turks on the island of Lesbos (or Lesvos), Greece, on Bright Tuesday (April 9, 1463), after the fall of Constantinople. St Raphael was the Abbot of Karyes near the village of Thermi on the island. St Nicholas was a deacon at the monastery, and St Irene was the 12-year-old daughter of the mayor of Thermi. The three saints were at the monastery with the village teacher and St Irene's father when the Turks raided it. Sts. Raphael, Nicholas, and Irene of Lesbos are rembered by the Church on April 9 and on the Tuesday of Bright Week along with St Eleni, New Martyr of Lesbos (who was also called Susanna).

These saints were unknown for about 500 years after their martyrdoms during the Turkish occupation of Lesbos. In 1959 the three saints appeared to the people on Lesvos in dreams and visions. They guided excavations of their own graves, called people to repentance, and cured many kinds of diseases.

The saints revealed how they were cruelly tortured at the monastery, calling it a "second Golgotha" (in the words of St Raphael). St Raphael's torture ended when his head was sawn off. St Nicholas died of heart failure when he was being tortured and Irene was tortured in front of her father and burnt alive in a clay cask, where her charred bones were later found. The teacher's head was cut off and placed between his legs when he was buried. A great deal of blood was shed at the monastery; the saints were martyred for the sake of their Christian faith and fatherland.

Found amongst the excavation was St Raphael's round metallic engolpion with a low relief of Christ Pantocrator on it.

Having contended on Lesbos for the sake of Christ God, you have sanctified the island since the discovery of your sacred relics, O blessed ones; for what reason we honour you, O God-bearing Raphael, together with Nicholas and the virgin Irene, as our divine protectors and intercessors with the Lord.

Let all of us honour as our protectors and miracle-workers the holy Martyrs who manifestly contended for Christ. Whose relics were hidden under the earth for many years, and who have manifested themselves to us in wondrous ways, Raphael, Nicholas and Irene, as well as those who contended with them in a godly-minded manner.

Let us honour with hymns the Hosiomartyrs of Christ, divine Raphael and venerable Nicholas, together with Irene, the guardians of Lesbos, for helping all.