Пётр Иванович Скипетров, July, 1863 - January 19, 1918) was the rector of the Church of Saints Boris and Gleb, which was next to the famous chapel of the Theotokos "Joy of All Who Sorrow", in the Kalashnikov district of Petrograd.[note 1] Hundreds of thousands of pilgrims flocked to the miracle-working icon of the Mother of God, and Father Peter enjoyed great influence among the people and was a strong enemy of the communists, whose regime he boldly denounced in his sermons. He was martyred in 1918 at the time of the Russian Revolution by Bolshevik-affiliated soldiers. He is commemorated on February 1.[1][2] 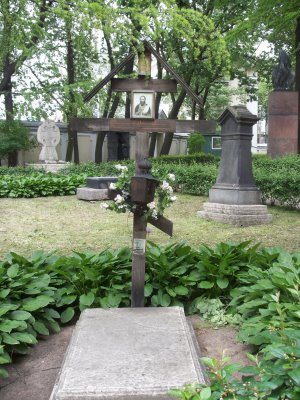 He was buried at the Tikhvin Cemetery, located at the Alexander Nevsky Monastery, in Saint Petersburg. The funeral was solemnly triumphant, for it occurred during the Paschal period and "Christ is risen!" was chanted. The burial service was led by Metropolitan Benjamin, accompanied by a large number of clergy. The sermon was delivered by Fr. Philosoph (Ornatsky).

By the resolution of the Holy Synod of the Russian Orthodox Church on December 26, 2001, his name was included among the New Martyrs and Confessors of Russia.[3]