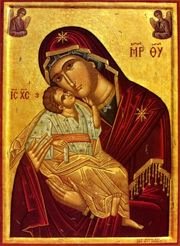 The Panagia Glykophilousa, "Sweet-kissing" or "Loving Kindness" icon depicts the Virgin Mary caressing her son, so that they appear to be kissing. In the Byzantine representations, the Child caresses her cheek while she appears sad, seemingly contemplating his coming Passion. The representation from the Cretan School of the 17th Century shows very pronounced characteristics of the Virgin Mother. A similar icon to compare to the Glykophilousa is the Eleousa (the Virgin of Tenderness), where the Mother is accepting the affection demonstrated by the Child Christ. The icon is remembered by the Church on March 27.

Like the Panagia Portaitissa is one of the icons saved from the Iconoclastic Controversy and brought miraculously to Athos. It was the property of Victoria, the devout wife of the eikonomachos senator Symeon, who, in order to have to hand it over, threw it into the sea. The icon, floating upright on the waves, reached the arsanas of the Monastery of Philotheou, where it was received with great honour and rejoicing by the Abbot and fathers of the Monastery, who had been warned of its advent by a revelation of the Theotokos. At the point on the shore where they placed the icon, holy water gushed out. There each year on the Monday of the Diakainisimi Week, there is a procession and blessing with holy water.[1]