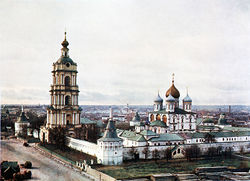 Novospassky Monastery (New Monastery of the Saviour) in Moscow 1911-1912

The monastery was founded in the early fourteenth century at the Savior (Spassky) Church of the Moscow Kremlin when Ivan Kalita moved the monks from the site of what is now the Danilov Monastery. Thus, the two monasteries share a common origin. In 1491, in connection with the rebuilding of the Kremlin, the monastery was moved at the direction of Ivan III (the Great) to the left bank of the Moscow River, to a location on Krutitsky Hill. It was then re-named the "the new Savior" to distinguish it from the original monastery in the Kremlin. The initial construction at the Krutitsky Hill site was the stone Church of the Transfiguration with a refectory and cells for the monks. However, none of the structures from this period has survived. During the seventeenth century the monastery came under the patronage of the boyar families of Sheremetev and Romanov. With the ascension to the throne by Michael Romanov in 1612 the monastery saw extensive stone construction as the monastery began to take on the appearance it has today. In 1630s and 1640s the wooden walls of the monastery were replaced by walls of stone as its fortification system was expanded and strengthened. By 1645, the construction of the central structure of the monastery, the Cathedral of the Transfiguration of the Savior, had begun. The two-tiered Church of the Veil of the Virgin was added in 1675, as an annex of the cathedral, that housed the monastery's trapeza. In 1795, the Church of the Sign was erected by the Sheremetev family as their private tomb. Also during the period of the construction of the cathedral, the infirmary Church of St. Nicholas the Miracle Worker and the residence of Patriarch Philaret were built. Between 1758 and 1785, the bell tower over the entrance gate was built. The late baroque style bell tower, designed by the architect Ivan Zherebtsov, includes on three of its four tiers the three different styles of Greek column: Doric, Ionic, and Corinthian. While its construction began in 1758, it was not completed until 1784 due to financing shortages. The height of the bell tower is only ten feet lower than of the bell tower of Ivan the Great in the Moscow Kremlin. 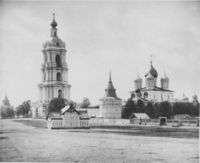 The monastery survived the great damage caused by Napoleon's troops in 1812 only to suffer misuse under the Soviets during the twentieth century. It was used as a prison, an orphanage, a furniture workshop, and as a 'rehab' center for alcoholics before becoming a museum in 1968. The monastery was returned to the Church of Russia in 1991 and has been under restoration since then.