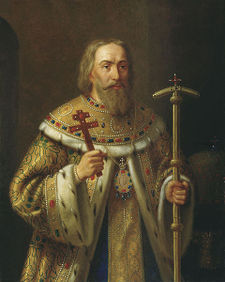 Philaret (Romanov) of Moscow was the Patriarch of Moscow from 1619 to 1633. While his son, Michael Fyodorovich, reigned as the first Tsar of the Romanov dynasty, Patriarch Philaret, (Russian: Филарет), was the de-facto ruler of Russia.

The second son of the prominent boyar Nikita Romanovich, the future Patriarch Philaret was born Fyodor Nikitich Romanov, (Russian: Фёдор Никитич Романов), in 1533 in Moscow, He was the first to bear the surname Romanov. In 1590, Fyodor Nikitich, as a young man, distinguished himself, during the reign of Tsar Fyodor Ivanovitich, as both a soldier and a diplomat during the war with John III of Sweden. During 1593/1594, he negotiated with the ambassadors of Rudolf II, the Holy Roman Emperor. Through these activities Fyodor Nikitich developed considerable influence and power. He was a cousin of the tsar, Fyodor Ivanovitich, through Anastasia, the first wife of Ivan IV.

Since Fyodor Ivanovitich was not capable of governing alone, his brother-in-law Boris Godunov was de facto tsar during Fyodor Ivanovitich’s reign, with the title Master of the House and Regent. With the death of Tsar Fyodor Ivanovitich in January 1598, a period, to 1613, called the Time of Troubles began during which the succession to the throne was disputed, as Fyodor was childless. Initially, Tsar Fyodor’s wife Irina succeeded to the throne, but soon abdicated and retired to a convent. The upper aristocracy and boyars proposed other candidates, particularly Godunov’s chief rival, Fyodor Nikitich, A popular choice for succession, Boris Godunov out maneuvered Fyodor Nikitich and the boyar party in establishing himself as tsar with the help of his debtor, Patriarch Job. Patr. Job had summoned the Zemsky Sobor in which the Boyars had little influence and proposed Boris Godunov as the next tsar. Knowing that the boyar nobility would never accept his accession, Boris soon was overcome by anxiety and suspicion. Through his spies and using terrorism he soon reduced the influence of the Romanovs. In 1601, Godunov forced Fyodor Nikitich and his wife Xenia Shestova into exile and to take monastic vows under the names Philaret and Martha, respectively. Philaret was confined in the Antoniev Monastery of northern Russia.

In May 1591, the young Prince Dmitiri, son of Ivan IV and half brother of Fyodor Ivanovitich, was murdered. As he was a natural successor to the throne, his name was to be used by claimants during the Time of Troubles. In 1603, the first false Dmitri appeared to claim the throne. In April 1605, Godunov died suddenly. During the following years as forces supporting various factions, of claimants, of the boyars, and Poles engaged in power struggles, a succession of claimants appeared claiming to be the tsar. Fyodor Godunov, Boris’ son, ascended the throne after the death of his father, but was soon killed in revolts in Moscow. The first false Dmitri was able to then ascend the throne on June 20, 1605, supported in part by the boyars. With his ascension Godunov’s friend, Patriarch Job was replaced by a Greek cleric, Ignatius. Abbot Philaret returned from his exile and was named metropolitan of Rostov and Ryazan. However, the false Dmitri quickly became unpopular as his frivolities and Roman Catholic bent turned the populous against him. On May 26, 1606, a revolt broke out in Moscow during which the false Dmitri was killed and Patriarch Ignatius was deposed, after which Vasily Shuisky, a prominent boyar, was proclaimed tsar.

Lacking solid support, the period of Tsar Vasily’s reign was marked by intrigues, new pretenders, civil war, invasion, and social unrest. Among the groups protesting the rule of Vasily was one led by a second, false Dmitri whose group included Metr. Philaret who was styled patriarch. In May 1610, Vasily Shuisky was dethroned and an interregnum began that lasted until 1613 while negotiations were conducted for a new tsar. Among the candidates was the Polish Prince Ladislas. Metr. Philaret, with Prince Golitsyn, led an embassy to the Polish king, Sigismund III, to sign the treaty that had been negotiated offering the throne to Prince Ladislas. Sigismund, however, who wanted the Russian throne for himself, arrested Metr. Philaret and his party and sent them into Poland as prisoners.

In January 1613, a Zemsky Sobor was summoned to elect a new tsar. After considering all the candidates, the Sobor elected on February 21, 1613 Mikhail Fyodorovitch Romanov, son of Fyodor Nikititich Romanov (Philaret) as tsar, ending the Time of Troubles. He was crowned tsar on July 21, 1613. Metr. Philaret was freed in 1619 on the conclusion of the truce of Deulino, signed February 13, 1619.

Upon Metr. Philaret’s return to Moscow he was enthroned Patriarch of Moscow on June 2, 1619 and was placed on equal footing with Tsar Mikhail with the title of grand sovereign.

From 1619 to 1633 there were two actual sovereigns, Tsar Mikhail and his father, the most holy Patriarch Philaret. Theoretically they were co-regents, but Patr. Philaret frequently transacted affairs of state without consulting the tsar. He replenished the treasury by a more equable and rational system of assessing and collecting the taxes. His most important domestic measure was the chaining of the peasantry to the soil, a measure directed against the ever increasing migration of the down-trodden serfs to the steppes, where they became freebooters instead of tax-payers. The taxation of the tsar's military tenants was a first step towards the proportional taxation of the hitherto privileged classes.

Patr. Philaret's zeal for the purity of orthodoxy sometimes led him into excesses but he encouraged the publication of theological works, formed the nucleus of the subsequently famous Patriarchal Library, and commanded that every archbishop should establish a seminary for the clergy, himself setting the example. Another great service rendered by the Patriarch to his country was the reorganization of the Muscovite army with the help of foreign officers. He had begun the course of borrowing from foreigners that led Russia to the reforms of Peter I. His death on October 1, 1633 ended the Russo-Polish War (1632-33), as the strongest prop was withdrawn from a tsar feeble even when supported by all the weight of his authority.