From OrthodoxWiki
(Redirected from Joseph (Al-Zehlaoui) of Los Angeles)
Jump to: navigation, search 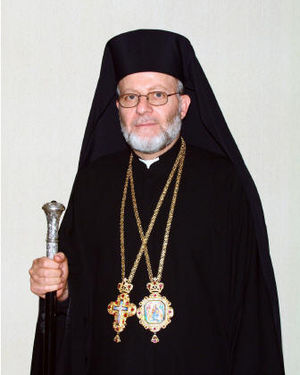 Archbishop Joseph of Los Angeles and the West

His Eminence the Most Reverend Metropolitan Joseph (Al-Zehlaoui), Archbishop of New York and All North America is the former primate of the Self-Ruled Antiochian Orthodox Christian Archdiocese of North America, serving since his election by the Holy Synod of Antioch on July 3, 2014 until his retirement in 2022. He previously served as the auxiliary bishop of Los Angeles and the West.

Joseph G. Al-Zehlaoui was born on November 2, 1950, in Damascus, Syria to Georgi and Mathil (Baghdan) Al Zehlaoui. He received his elementary education at the St. John of Damascus and Al Assiyeh schools in Damascus, and his secondary education at Balamand Monastery in Koura, Northern Lebanon. He then studied philosophy at Lebanese University in Beirut and theology, languages and music at Salonika University in Greece. He is fluent in Arabic, English and Greek.

Bishop Joseph was ordained to the holy diaconate while a student in Salonica, in December, 1976. Subsequently, he was ordained to the Holy Priesthood by His Beatitude, Patriarch Ignatius IV, at St. Mary Cathedral in Damascus in December, 1980. While a deacon, he served parishes in Salonica. As a priest, he was dean of St. Mary Cathedral of Damascus, and overseer of the Holy Cross Church and other parishes in the suburbs of Damascus. In 1983, he pastored the Arab Orthodox faithful living in London, England, and in 1986 was sent to Cyprus to minister to the Arab Orthodox living on the island. His election to the holy episcopate was on May 5, 1991, and the consecration was on June 30, 1991, in the Holy Cathedral of the Patriarchate in Damascus with the title Bishop of Katana, Syria. 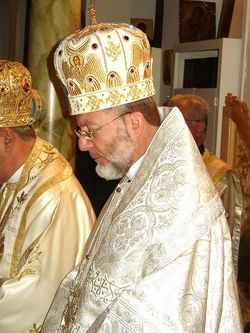 Bp. Joseph serving the Divine Liturgy at the side of Metr. Philip (Saliba) in Brooklyn, New York.

During his clerical ministry, he served as General Supervisor and Professor of Religious Education at the Al Assiyeh Orthodox College and supervised the Patriarchal headquarters in Damascus. Besides being the Patriarchal Assistant during the past several years, Bishop Joseph served as the secretary to the Holy Synod of Antioch, Editor-in-Chief of the Patriarchal Bulletin and participated in several theological conferences in Greece, Texas and Australia.

A bishop for the Western USA

At the request of His Eminence, Metropolitan Philip (Saliba) of New York, His Grace was selected by the Holy Synod of Antioch on January 24, 1995, to be an auxiliary bishop for the Antiochian Orthodox Christian Archdiocese of North America.

On September 12, 2004, His Grace, Bishop Joseph, was enthroned as the first bishop of the Holy Diocese of Los Angeles and the West by Metr. Philip and the Local Holy Synod of the Archdiocese.