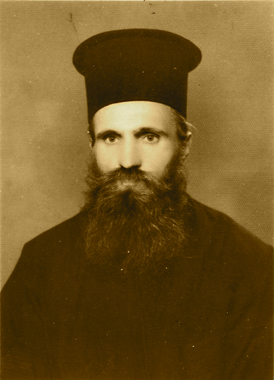 Fr. John James the Chozebite (Ioan Iacov Hozevitul) is one of the most recent Romanian saints glorified by the Romanian Orthodox Church. He became a monk at Neamt Monastery and soon after his conversion he moved to the Holy Land where he lived near the downstream of the Jordan river and, toward the end of his life, in the wilderness of Hozeva. His devotion sets an example of a true life in Christ, especially for present-day Christians. The Church celebrates his feast day on August 5

John was born on July 23, 1913 in Crainiceni—a village in Botosani county—as an only child to two very faithful peasants, Maxim and Katherine (Ecaterina). His baptism name was Elias (Ilie) but he would often be addressed as little Elliot by his close ones. His mother died six months after giving birth and two years after this sad event his father was killed in the war in the autumn of 1916. The child was placed into the care of his paternal grandmother, Mary (Maria) who taught him how to fast, pray and live in accordance with the teachings of the Church. Following the death of his grandmother in 1923, the child was entrusted to his uncle Alec (Alecu), a father of six, who became his guardian.

Elias attended primary school in his home village and from 1926 to 1932 he continued his schooling at the Mihail Kogalniceanu secondary school in Hotin county and at the Dimitrie Cantemir highschool in Cernauti, where he distinguished himself as the most studious pupil.

The Kingdom of God and the reclusion of the Desert Fathers had had an appeal to Elias since early childhood and in the summer of 1932 when his relatives suggested that he should study theology and become a priest, he declined their suggestion, convinced that God had higher expectations of him: ”No, I shall become a monk”, he told them. One year later, as he was doing field work, he prayed that God should show him what path to choose in life and he suddenly heard a voice from above that told him the answer to his inquiry, ”Monachism!”. In the summer of that same year, on a Sunday, having received the blessing of his confessor, he packed his religious booklets and the icon of the Theotokos from his parental home and, under the inspiration of the Holy Ghost, went to Neamt Monastery whose congregation professed him and alloted him chores in the library and in the sickroom of the establishment.

In 1934 he was conscripted in the 9th Infantry Regimen in Dorohoi county and one year later, after he had fuflilled his military obligations, he returned to Neamt and continued his noviciate.

In 1936, on the Great and Holy Wednesday, rasophore Elias received the monastic tonsure from archimandrite and the future archbishop of Iasi, Valerius (Valerie) Moglan, and a new name—John—as is customary for newly tonsured monks. His godfather and spiritual advisor was the hieromonk Joachim (Ioachim) Spatarul, the abbot of the Pocrov skete and a most renown Moldavian monk.

Yearning for reclusion in the land where the Savior was born, suffered and rose from the dead, John set off for the Holy Land together with two other fellow-monks, Damascene (Damaschin) and Claudius (Claudie) in November of that same year. Having reverenced the holy sites, the Cross and the Holy Sepulchre, the three monks took shelter for the winter at St. Sabbas, a monastery situated in the wilderness of the Jordan valley near Bethleem. This is where John would spend the next ten years of his life, enduring many temptations, illnesses and troubles caused by men and demons. His first task at St. Sabbas was that of a paracliser. John had a great respect for the church building and the correct performance of sermons. He would make wafers, clean the precincts and ring the bell during sermons. He cultivated a feeling of love, mercy and humbleness toward everyone. He was also tasked with nursing the ill in the monastery’s sickroom, and he attended to all of their needs regardless of whether they were monks, beduins, Arabs or whether they had fallen ill or been injured in the war.

His confessor was Sabbas (Sava), a Macedonian who looked up to the Romanian monks who were abiding in the Holy Land. During the daytime John would go about his chores in the skete and the sickroom and at night he would shut himself in his cell and pray or read the Gospel and the wirtings of the Holy Fathers. Having learnt Greek, he translated many patristic writings which then he used to edify himself spiritually and those who sought him out for advice. He also had the gift of writing spiritual lyrics which he offered to the Romanian monks and pilgrims who came to the Holy Land to rever the Holy Sepulchre.

Between 1939 and 1940 he lived in a cave in the wilderness of Quran, near the dead sea. This is where he met his most faithful apprentice, Joanichios (Ioanichie) Paraiala. John’s daily meal consisted of biscuits and a few fruits. At night he would pray in secret, enduring many temptations. In 1940 he was sent to a concentration camp on Mount Olive and a year later after his release he returned to the monastery.

On May 13, 1947, at the recommendation of Archimandrite Victorin Ursache, the abbot of the Romanian Settlement in Jerusalem, and with the permission of the Patriarch of the Romanian Orthodox Church, John was appointed deacon in the Church of the Holy Sepulchre and later that year he would be ordained priest by Archbishop Irinarch. He was also charged with watching over the Romanian skete of St. John the Baptist, which had recently been established by the Romanian Patriarchate in the vicinity of the valley of the Jordan river.

During the five years of his abbotship John performed every sermon in Romanian on a daily basis. He also translated numerous teachings of the Holy Fathers and made them available for many Romanian monks and pilgrims. He wrote a considerable volume of religious lyrics, renovated the skete’s church building and the cells of the monks and reinforced the spirituality of the settlement by confessing and giving communion to as many Romanian pilgrims as he could. At night he would pray secretly in his cell or outdoors in the Jordan valley, trying to follow in the steps of St. Mary of Egypt. He wouldn’t eat anything during the daytime, preferring to work in the garden and at the improvement of the skete or to attend to the needs of the pilgrims, but whatever he did he would constantly pray in his mind and heart. In the evening he would perform the necessary sermons and receive pilgrims for confession and then withdraw for a few hours in a cave near the Jordan river wherein he would rest for a few hours before returning to the skete.

His most faithful apprentices were Joanichios and a few elder Romanian nuns, Melania, Nathalia, Galinia, Cassiane and Magdalene, his spiritual daughters who were under his supervision. Due to his love for Christ, silence and prayer, John resigned from the abbotship of the skete at the end of 1952 and moved with his apprentice to the monastery of St George the Chozebite and in the summer of the following year they settled in a cave near by called The Cell of St Hannah, wherein tradition has it that St Hannah would withdraw to pray to God to enable her to conceive a child. This is where John and Joanichios would dwell for the next seven years, praying endlessly day and night, fasting, weeping in secret and contemplating God while enduring all sorts of temptations, insufficiencies, torments, struggles against demons and complete mutiny, all for the sake of Christ. He wouldn’t receive anyone into his cell, whose access was only by means of a ladder, preferring to communicate with his visitors through prayer, written letters and his apprentice.

On the most important feast and fast days, John and Joanichios would perform the Divine Liturghy in the paraclise of Saint Hannah’s Cell and receive communion, and then gratefully give thanks to God . In his free time he would sit in the light, at the entrance of his cave, where he would write spiritual lyrics and translate patristic teachings from Greek. His daily meal consisted of biscuits, olives and figs and a few cups of water. At night he would sleep a few hours on a plank with a stone for a pillow.

In 1960 his health deteriorated but he endured it bravely. Knowing that his end was near, he received communion for the last time on August 4. The next day at five in the morning he gave his soul to God. He was only 47 years old. Three days later he was entombed in the cave by the abbot of St George, Archmandrite Amphilochios (Amfilofie). John had known the date of his death, as evident by the fact that he had engraved it in the walls of the cavern. At one point during the funeral sermon, many small birds that John would throw bread to daily swarmed into the cave and flew over the heads of the attendants throughout the entire ceremony.

Twenty years later, on August 8, 1980, his remains were found incorrupt and emanating a pleasant scent, an indication that God had magnified him and numbered him among His saints as reward for his holy life. On August 15, the abbot of St George fashioned a cypress casket for his remains and processed it together with other archbishops of the Orthodox Patriarchate of Jerusalem and thousands of pilgrims who were attending the feast of the Dormition of the Theotokos, and placed the casket in St. Stepehen’s church, next to the casket containing the relics of St. George the Chozebite.

Since then, many Orthodox and even catholic pilgrims have come to venerate his relics and seek his help, and the requests of those of true genuine faith have always been honored.

John is reverenced by all Orthodox Christians, but even more so in Romania, Greece, Cyprus and the Holy Land. The Holy Synod of the Orthodox Church of Romania, after carefully examining John’s holy life and relics, decided, in June, 1992, to list him among the rest of the saints as his holy eminence John James the Chozebite and put his feast day on August 5, the day of his death.

For his holy prayers, Lord Jesus Christ, Son of God, have mercy on our souls.