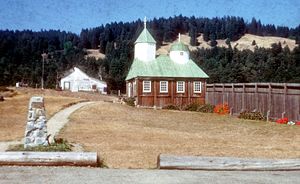 The Holy Trinity Chapel at Fort Ross, California, was part of the Russian colony on the northern coast of California, above San Francisco, during the first half of the nineteenth century. The chapel was used by the Russians and Aleuts who were members of the colony until it was sold in 1841. The Fort Ross site, including the chapel, is now a part of the California State Park System.

The Russian-American Company from Russian America established the Ross Colony in Northern California in 1812 primarily as an outpost of the Alaskan colony to produce food that could not be produced in the Alaskan coastal climate, and secondarily to extend the hunting range for sea otter pelts along the mid Californian coast.

The original focus of the colony was the stockade, Ross Fortress, that was completed on September 10, 1812, with the event marked by a religious ceremony even without the presence of any clergy. As the colony grew most of the inhabitants began to live and work outside Ross Fortress. All industrial activities were performed outside the stockade by a work force of a mixed ethnic composition. The population of the colony varied but included more than 250 Russians, Aleuts, Creoles (children of ethnically mixed unions), and native peoples (principally Kashaya, Coast Miwok, and Southern Pomo tribes), who all worked in general harmony.

The colony's industries included shipbuilding, forging, tanning, and agricultural products including stock raising. While mainly intended for export to the Alaska colony these products became items of trade with the Spanish and Mexicans to the south. Since the Californios, as they were called, did virtually no manufacturing, the colony's production of farm implements and household wares was in great demand. The industrial products were traded with the Spanish and Mexican settlements in California such as San Francisco, Monterey, and as far south as Santa Barbara.

By the 1830s, the political environment along the Pacific coast changed such that more food was available, at lower cost, from farm settlements in Oregon managed by the Hudson's Bay Company, and the economic value of the Ross Colony, that was not able to supply sufficient food for Alaska, began to wane. By 1839, the Russian-American Company decided to abandon the colony. The colony was sold in 1841 to Captain Johann Augustus Sutter, and the last colonists sailed for Sitka on January 1, 1842.

Orthodox Christianity was part of the lives of the Russian, Creole, and Aleut colonists. In early 1820s they expressed their intentions to build a chapel dedicated to St. Nicholas at their own expense. The chapel was built within the walls of "Ross Fortress." The Christians of the colony were helped by the officers and crews of three Russian Navy ships in 1823-1824 who donated a considerable sum for the proposed chapel. The chapel was completed in 1825 and was used by the colonists for reader services. (However, the Russian Orthodox Church Sites in Alaska Survey, compiled in the 1970s indicates that a chapel dedicated to St. Helen was constructed already in 1812. Whether this is the same chapel is unknown.)

The chapel was never formally consecrated as no clergymen were permanently assigned to it. In later years a few priests visited the Ross colony and its chapel. Among these priests was Fr. John Veniaminov—later Bishop Innocent of Alaska, then Metropolitan of Moscow, and saint—who spent three months in 1836 at the colony. During this time he visited the Spanish missions in the San Francisco area. The missions he visited were San Raphael, San Jose, Santa Clara, and San Francisco. At the time of his visit, Fr. John recorded that of the population of about 260 at Fort Ross, fifteen percent of the local Indian population living and working in the colony were baptized into the Orthodox Christian faith.

The genuine cooperation among the three diverse cultures at Fort Ross, among native Californians, native Alaskans, Creoles, and Russians, was attributed by some to the Orthodox Christian religious values instilled in many of the colonists by the Orthodox clergy of Russian America.

With the departure of the Ross colonists in 1842, the fort and its chapel came under the care of successive owners. In the spring of 1897, Bishop Nicholas, Fr. Sebastian Dabovich, and reader Paul Grepachevsky visited Fort Ross, and were dismayed at the condition the sacred sites were in, noting that they couldn't enter the chapel since it was now used as a barn and that only "insignificant remains" of the cemetery were to be found. In 1903, the two and a half acres comprising the fort, chapel and other buildings were sold to the California Historical Landmarks League, which deeded the property to the State of California in 1906. In 1905, eight years after the visit by Bishop Nicholas and company to Fort Ross, Bishop Tikhon of Moscow and Fr. Theodore Pashkovsky (the future Metropolitan Theophilus) visited, and according to them, the situation at the fort had improved, noting, for instance, on the "cleanliness of the chapel". Also in 1906, the great San Andreas fault earthquake occurred severely damaging the buildings in the area of the old colony, as the San Andreas fault passes very close to Fort Ross. The chapel itself was largely destroyed, the only parts of the building surviving being the roof and the towers on the roof. During the following years these buildings, including the chapel, were restored. The area passed to the administration of the California Parks and Recreation Department that now controls the use of the fort.

The main chapel restoration took place between 1915 and 1917, though mistakes that were made were corrected between 1955 and 1957. Holy Trinity Chapel was designated a National Historic Landmark in 1969, due to it being "architecturally significant as a rare U.S. example of a log church constructed on a Russian quadrilateral plan". Unfortunately on October 5, 1970, an accidental fire burned the church to the ground, causing the chapel itself to be de-listed in 1971. A complete reconstruction was built in 1973. However, the whole Fort Ross settlement retains its National Historic Landmark status.

The area of the Fort Ross Historic Park has through the twentieth century been enlarged to 3,277 acres as of 1992.

As recorded by the Orthodox Church in America, the successor to the Russian Orthodox mission in Alaska, the chapel is now called the Holy Trinity Chapel. Orthodox services are held in the chapel twice each year: on July 4 and on Memorial Day. The July 4 services began in 1925. Additional services may be conducted for special events.