Metropolitan Germanos of Patra (Greek: Παλαιών Πατρών Γερμανός, Palaion Patron Germanos, Georgios Ioannou Kozias, 1771-1826) was a hero of the Greek War of Independence that he blessed with the proclamation of independence on March 25, 1821, at the Monastery of Agia Lavra. 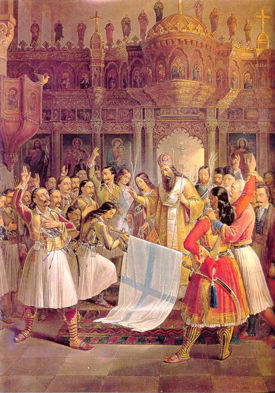 Germanos proclaiming independence on March 25, 1821, at the Monastery of Agia Lavra. Oil painting by Theodoros Vryzakis, 1865.

Like Patriarch Gregory V, he was born in Dimitsana, Arcadia, on March 25, 1771. His name in the world was Georgios Kozias, the son of jeweler Ioannis Kozias. He received his education at the school of his native village and then at Argos, where he became a clergyman and served as deacon of Metropolitan Iacovos. He then left for theological studies in Smyrna in 1797, where he was employed at the Bishopric by Metropolitan Grigorios. When Grigorios became Patriarch in 1797 he took Germanos with him and promoted him to Archdeacon of the Patriarchate. While in Constantinople Germanos completed his studies and his general education.

Germanos served as Archdeacon (1800-1806) and then as Protosyngellos at the Metrolopis of Cyzicus, where he was serving when he was elected Bishop of Patrai in 1806. Thanks to his charisma, Germanos acquired a special glamour as Metropolitan of Patrai. He was appointed a Synod member in Constantinople where he stayed three years (1815-1818).

In 1818 upon returning to his see, he became a member of the "Society of Friends" (Filiki Hetairia), which was seeking independence for the Greek nation from the Ottoman yoke.

On March 13 1821, a Sunday, Germanos blessed the standard during the liturgy at Agia Lavra Monastery in Achaea, and on March 25 1821, blessed the fighters at Agia Lavra and hoisted the flag of the Greek War of Independence in St. George's Square at Patrai.

Germanos left Greece in 1822 for Italy, in an abortive mission hoping to obtain aid and support for the war effort from the Pope and the European Congress at Verona, but returned in 1824 without having seen him.

In the feuds among the Greeks he played a conciliatory role. Nevertheless he was arrested by the Government camp, on orders from Gouras and Kolettis, and sufferred greatly.

Bishop Germanos died on the night of May 30-31, 1826, when he was a member of the Foreign Affairs Committee of the Third National Assembly, and was buried with honours in Nauplion. Later his remains were transferred to Dimitsana, his native village.

He wrote memoirs of the first two years of the Greek War of Independence that are invaluable to Greek historians.