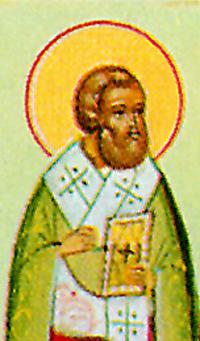 Saint Eutychius, Patriarch of Constantinople, was born in the province of Phrygia under the upbringing of well-known and pious parents. His father Alexander was a soldier, and his mother Synesia was the daughter of the priest Hesychius of Augustopolis. He received his basic education from his grandfather and was then sent as a twelve year old to Constantinople where he studied the sciences. It was during his studies that Eutychius realized how much more expansive God's wisdom was in comparison to any science. After he realized this, he joined an Amesean monastery to live his life unto the Lord.

In his first years as patriarch of Constantinople, Eutychius called together the Fifth Ecumenical Council, in which heresies were anathematized. He had much more trouble battling the heresy of Aphthartodocetism, the belief that Jesus Christ was imperishable and was not able to suffer while dying on the Cross, since Emperor Justinian was allegedly fooled by the teaching. The emperor grew angry with Eutychius and sent him into exile to an Amasean monastery in the year 565.

While living the ascetic life in exile, he continued to serve the Lord diligently and worked miraculous bodily healings and spiritual cleansings. The saint ensured that stored grain was never used up by praying to the Lord after Persians invaded and brought Amasea to ruins. Saint Eutychius also was granted the gift of prophecy, predicting the successors of Emperor Justinian.

After remaining in exile for twelve years, Eutychios returned to his rightful position in 577. On April 6, 582, he called his clergy together as he reposed in peace.

You lived like an angel on earth,
O Eutychius vessel of grace;
Your words and deeds confirmed the divine gift bestowed on you.
By your intercessions
Preserve the Church from all necessity.

Praising Eutychius in faith and godliness
Let us the faithful bless him in love
As a great shepherd, wise teacher, minister and expeller of heresies;
For he prays to the Lord for us all.