From OrthodoxWiki
Jump to: navigation, search
This article or section is incomplete. It is more than a stub, but does not yet include a sufficient summary of the subject matter. You can help OrthodoxWiki by expanding it.

The Diocese of Alaverdi is an ecclesiastical jurisdiction of the Church of Georgia located in the South Caucasus. 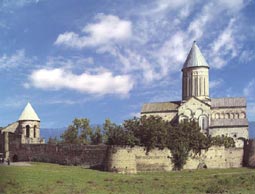 The Diocese of Alaverdi was formed at the beginning of the ninth century under the reign of King of Kakheti Kvirike III. The Alaverdi cathedral was built beside the Alaverdi monastery, which had been founded in the sixth century by the famous Georgian monk Ioseb the Alaverdian, one of the 13 Assyrian fathers.

The primate of the diocese uses "Amba Alaverdian" as his title. His Eminence Daviti (David Makharadze) is the Metropolitan of Alaverdi. The Alaverdi Eparchy also includes the Telavi district of Georgia.