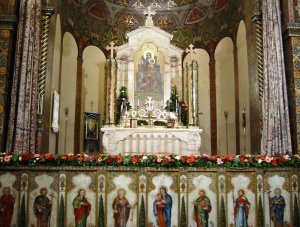 An Armenian altar, with curtains.

The Armenian Rite is an independent liturgy. This rite is used by both the Armenian Orthodox and Armenian Catholic Churches; it is also the rite of a significant number of Eastern Catholic Christians in the Republic of Georgia.

The liturgy is patterned after the directives of Saint Gregory the Illuminator, founder and patron saint of The Armenian Church. Unlike the Byzantine Church, churches of the Armenian rite are usually devoid of icons and have a curtain concealing the priest and the altar from the people during parts of the liturgy, an influence from early apostolic times. The use of bishop's miter and of unleavened bread, is reminiscent of the influence Western missionaries once had upon both the miaphysite Orthodox Armenians as well as upon the Armenian Rite Catholics.

Celebration of the Eucharist

The order of the Armenian celebration of the Eucharist or Mass is initially influenced by the Syriac and Cappadocian Christians, then (from the 5th century A.D. onwards) by Jerusalemites, then by Byzantines (from ca. the 10th century) and lastly by the Latins in the Crusades. The Armenians are the only Eastern Church using wine without added water, and are criticised by the East and West for their seemingly monophysite beliefs, see miaphysitism versus monophysitism in the Armenian Apostolic Church. The Armenians use unleavened bread for the Eucharist.