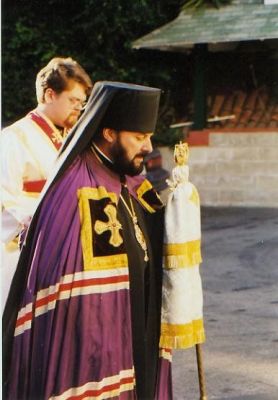 At the end of 1963, Alexander enrolled at Holy Trinity Seminary in Jordanville, New York, from where he graduated with a Bachelor’s Degree in Theology in 1967. A year earlier, Archbishop Averky (Taushev) ordained him to the diaconate, and during Great Lent, Metropolitan Philaret (Voznesensky) of blessed memory, ordained him to the priesthood and assigned him to the Protection of the Holy Virgin Russian Orthodox Church in Los Angeles, where he served as rector for 31 years. From 1971-1985, Fr Alexander led several youth pilgrimages to Greece and the Holy Land. While spiritually nourishing his flock, Fr Alexander continued his scientific education, receiving a Bachelor’s Degree in Electronics in 1978, then a Master’s Degree in Electronics, and finally, in 1983, an Engineer’s Degree from the University of Southern California in Communications. He worked in the Jet Propulsion Laboratory of NASA. His lay work enabled Fr Alexander to become an expert in computers, which in turn helped him publish numerous missionary pamphlets which enjoyed great popularity in Russia and abroad. Today there are over 300 brochures published in Russian, English and Spanish on Orthodox Christianity.