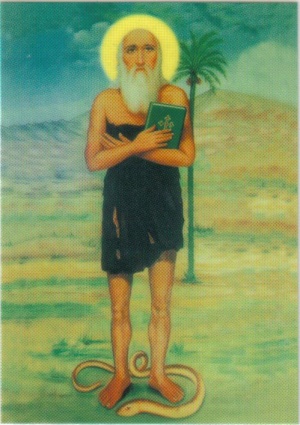 Coptic icon of St. Barsoum El-Erian depicting the saint with a snake
Abba Barsoum was a thirteenth century Coptic saint. He lived in Egypt among the trials and tribulations of the Ayyubid Era [1] of persecution. Abba Barsoum offered the comfort of the Holy Spirit to all those who suffered around him. God also granted this holy saint the gift of performing signs and miracles due to his unwavering faith.

Abba Barsoum was born in 1257 A.D. Abba Barsoums' history reveals that at his parents' death he inherited great wealth. His uncle coveted his wealthy inheritance. St. Barsoum did not quarrel with his uncle nor think ill thoughts toward him. Rather, St. Barsoum remembered the words of King Solomon, "Vanity of vanities! All is vanity... what profits a man of all his labor that he endures under the sun." (Ecclesiastes 1:2) His relatives encouraged offense at the uncle, but St. Barsoum refused.

St. Barsoum unhesitatingly left his wealth behind and followed his heart's desire. He sojourned to live as a hermit in a cave near the Church of St. Mercurius in Old Cairo. History records that a large and foreboding snake lived in the cave he entered into and St. Barsoum changed the nature of the snake (see icon on the right). "You shall tread upon the lion and the cobra. The young lion and the serpent you shall trample underfoot." (Psalms 91:13)

Abba Barsoum spent his days meditating, worshipping, and serving others in the Holy Name of the Lord Jesus Christ. Many people, including Muslims, sought his blessings.

St. Barsoum being an extremely humble and pious man was not concerned with his material needs. He wore a simple goatskin around his waist for covering and therefore was called "El Erian" (Arabic), which means "the naked or disrobed."

During one of the persecutions, he along with other Christians were tortured and thrown into prison. In jail he continued to pray to the Heavenly Father on behalf of his tortured Christian brothers. Those imprisoned were released quickly and allowed to go on about their way due to the faith and prayers of this humble saint. His works continued to be ongoing.

Many miracles are attributed to this great saint. One of such well-known miracles occurred when he went to reside on the roof of a church in Turah, south of Cairo near Helwan. Many people had come from far and near to see Abba Barsoum. The crowds of people were so numerous that the monastery's abbot was embarrassed because he didn't have enough food for all the people. Abba Barsoum sensed the abbot's distress and called for one of the monks who worked in the kitchen.

He requested that the monk bring him a little of the soup they were cooking. Abba Barsoum prayed over the soup and made the sign of the cross, then asked the monk to take it back to the kitchen and mix it with the rest of the soup being prepared. St. Barsoum then instructed the monk to serve the soup to everyone in attendance. That day the Lord who blessed the five loaves and two fishes also blessed the food of the monastery and everyone ate until satisfied. When the abbot realized how his lack faith had made him weak he confessed his shortcomings to Abba Barsoum.

Abba Barsoum El Erian departed in the Lord on September 10, 1317 A.D. (Nasie 5, 1033 A.M., according to Coptic calendar) and was buried in the Shahran Monastery. Miracles continue to occur to this day through the powerful intercession of St. Abba Barsoum the Naked.