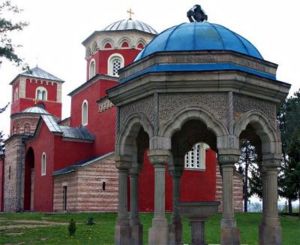 The Zica Monastery, built in the early 13th century, is near Kraljevo at the entrance to the Ibar Gorge in central Serbia. It was the first seat of the Serbian Archbishopric. 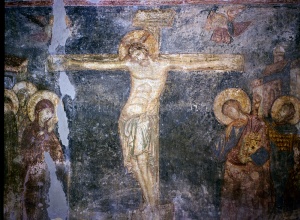 The monastery was founded by King Stefan Prvovencani, the First-Crowned, and built in the early 13th century and received St. Sava as the first Patriarch of the Serbian Orthodox Church in 1219. The monastery was burned in a raid near the end of the 13th century and was subsequently deserted. Multiple renovations were carried out during the late 13th and early 14th centuries. The most complete renovations were completed during the rein of King Milutin (1282-1321).

Nikolai Velimirovic was consecrated Bishop of Zica in 1919. Zica suffered damage during World War II which Bishop Nikolai was unable to restore, because of his arrest there in 1941. After the war Zica became a woman's monastery. Zica celebrated its 800th anniversary in 2005.

Zica is built according to the Raska school in the Romanesuque style. The monastery was originally painted red in the tradition of the Mount Athos monasteries. There are few frescoes dating back to the 13th century remaining in the lateral choir recesses. Most of those existing today date from the early 14th Century. The Church of the Ascension of our Lord is a single nave church build in four sections, the third rising up to a high octagonal dome.

Initial layer of Zica fresco painting was done in 1220's with some work extending to 1234, planned by St. Sava. According to the written records, St. Sava brought artists for this work "from Constantinople"[1], further details about them are not known. In style, modest iconography and rigid style are followed. St. Sava signature design of expressing important ideas by monumental figures, typically in pairs have been used. Good examples are paired frescoes of St.Procopius and St.Artemius as well as St.Stephen and St.Demetrios, where figures dominate with height of 2.6 meters. From remaining fragments we can conclude that there have been two major themes: Childhood and Passion. Most important remaining fresco from this period is the Crucifixion.

After fire damage at the end of 13th century great part of the original fresco layer have been lost. During 14th century new fresco layer have been added. Though these have been done in a new, Palaeologuian style effort to conserve remaining old work and reconstruct lost content is clear[2]. Most significant frescoes from this period are likely pair of apostles: Apostle Peter with church over his head symbolizing establishment of the Church of Christ on Earth with Peter as its head and Apostle Paul with the book on his head symbolizing his leading role in Christian teaching.

Following practice first established in decoration of Monastery of Studenica, in Zica too all the inscriptions were done in Serbian language, instead of the traditional Greek satisfying both political needs of the Serbian Royal family and practical needs of the population.