Yuriev Monastery, (Russian: Юрьев монастырь), also St. George's Monastery, is among the oldest monasteries of Russia. It is located south of Novgorod on the left bank of the Volkhov River near where it flows out of Lake Ilmen. The monastery was founded during either the eleventh or twelfth century and is the principal monastery of Novgorod.

The date of the establishment of the Monastery of St. George is unclear. Legend accords its founding in 1030 following a victory by Prince Yaroslav the Wise over the Chud tribes, an event that he commemorated with building churches in Novgorod and Kiev. He also founded at that time the town of Yuriev, now Tartu in what is now Estonia, all honoring the saint after whom Yaroslav was named in baptism, Yuri (George). Yuriev Monastery grew around the church built in Novgorod which had been built along the way to Yaroslav's summer residence in the village of Rakomo on the shore of Lake Ilmen. 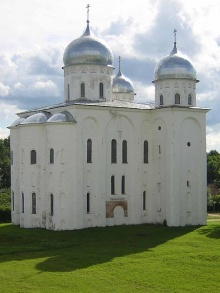 Documentary evidence records the existence of the monastery to 1119 when Prince Vsevolod Mstislavovich had a cornerstone placed by the Master Peter for a stone church dedicated to St. George that became the main church at the monastery.

The significance of the monastery for Novgorod increased as St. George Cathedral became the place where the Novgorod First Chronicle was recorded and also became the burial grounds for the Novgorodian princes. Among those buried there were the mother of Alexander Nevsky and his brother Dmitri Shemiaka. By early thirteenth century the igumen of the monastery had been raised to the dignity of archimandrite. Soon, the archimandrites became honored with the title of Archimandrite of Novgorod and, for several centuries, they were the only archimandrites in the lands of Novgorod.

During the time before Moscow subdued Novgorod, a number of the monastics of the monastery were elected archbishop of Novgorod. Before his election as Archbishop of Novgorod, Abp. Spiridon was a monk and deacon at Yuriev Monastery.[1] He served as archbishop from 1229 to 1249. Abp. Feoktist, another monk, served from 1299 to 1308. Abp. Moses,[2] who served for two periods as archbishop, from 1325 to 1330 and 1352 to 1359, was also archimandrite of Yuriev Monastery before his election.

Yuriev Monastery suffered the fate of most Orthodox Church property in Russia after the government of Russia was taken over by the Bolsheviks. By 1928, five of the six churches at the monastery were destroyed and, in 1929, the monastery itself was closed. During World War II, the area around Novgorod was part of the battle fronts and was occupied by German and Spanish forces who caused further damage to the monastery precincts. In 1991, the monastery was returned to the Russian Orthodox Church. Since then the monastery has been under restoration.

The monastery is a large walled area that is dominated by the Cathedral of St. George. The cathedral is a rectangular, almost square, white stone structure topped by three three domes, the largest dome is centered over the building with two smaller domes on the ends of the front of the building. The cathedral is 105 feet tall, 85 feet long, and 78 feet wide. The interior of the church was painted during the middle of the twelfth century, and "renewed" in 1902. The original frescos can be seen only at the window slants and in the upper part of the ladder tower, where a small church existed in the early years. Ascending 93 steps, the large figures of saints seem to surround you, as if born by the light that streams through large windows, making one a participant in their liturgy.

Additionally, the monastery complex includes a 160 foot belfry and the Cathedral of the Exaltation of the Cross built in 1823. This cathedral is surmounted by five domes painted blue covered with gold colored stars. The complex also includes an assortment of five additional buildings. Restoration work is still in progress.