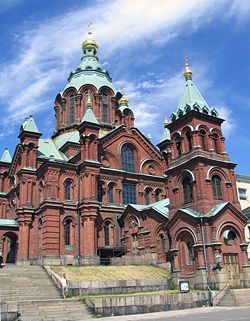 The Uspenski Cathedral (Finnish: Uspenskin katedraali, Russian: Успенский собор), in Helsinki, the capital of Finland, is the Orthodox cathedral of the Metropolis of Helsinki and the see of the Metropolitan of Helsinski. The cathedral is dedicated to the Dormition (falling asleep) of the Holy Theotokos. (the Virgin Mary).

The cathedral was built during the nineteenth century during a period in which Finland was part of the Russian Empire. The cathedral was designed by the Russian architect Aleksei Gornostayev, who died in 1862 before the cathedral was built. Construction took place during the years 1862 to 1868. His design was based upon a sixteenth century church near Moscow. Aleksei Gornostayev was among the pioneers in revival of Russian architecture, notably of the tented roof architecture of the north of Russia.

The Uspenski Cathedral is the largest Orthodox church in western Europe and is situated upon a hillside on the Katajanokka Peninsula overlooking the city and the South Harbor. The cathedral is surmounted by 13 onion domes. On the back of the cathedral is a plaque commemorating Emperor Alexander II of Russia, ruler of Finland during its construction.

On August 16, 2007, the nineteenth century icon of St Nicholas - The Wonder Worker, one of the valuable treasures of the cathedral, was stolen and has not been recovered.