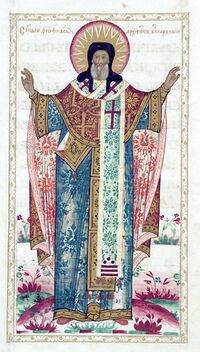 Theophylact of Ohrid,
an icon from the 17th century

Blessed Theophylactus of Ochrid (ca. 1050/60-ca. 1108) was one of the most famous Byzantine biblical scholars and exegete. He was born on the Greek island of Euboia, close to Athens, some time between 1050 and 1060. He pursued an education in Constantinople where he studied under the finest teachers of literature and rhetoric of his time and became one of the clergy of the Great Church there. He was appointed professor of rhetoric at the patriarchal academy and tutor to the emperor's children. As a relatively young man, he was consecrated as bishop and sent, against his will, to Ochrid, where he was the Metropolitan of the Church in Bulgaria for twenty-five years.

An inspired theologian and orator, he has left many homilies and, most importantly, a commentary on the whole New Testament (Theophylactus completed extensive biblical commentaries on the four Gospels, the Acts of the Apostles, and the New Testament Epistles. There is also supposed to be a commentary on the Greek text of the Psalms and on the Prophets), which has been treasured by Orthodox Christians ever since. The Patrologia Graeca has a long Sermon on the Cross, another on John the Baptist, and a third on the Feast of the Presentation.

In his last years he moved to Thessalonica, where he reposed in peace; the exact year of Blessed Theophylact’s repose is not known, but the latest date that can be ascertained from his letters is 1108.

The Serbian Orthodox Church, whose jurisdiction in later years came to include Ochrid and Macedonia, and other Orthodox Churches, commemorates Theophylactus as a saint, on December 31.