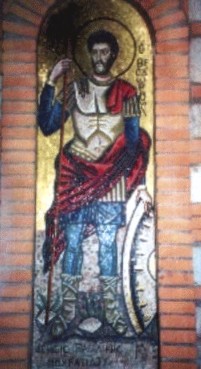 He was tortured and martyred in the region of Theodosiopolis (Erzurum) by the Danishmend Turks for refusing to convert to Islam, under one of Emir Danishmend Gazi generals named Amir Ali (Amiralis, Amyrali).

His feast day is celebrated by the Orthodox Church on October 2.[1]

Theodore Gavras was born in the 11th century in a rural town called Atra, of the Byzantine theme of Chaldia, from pious and illustrious parents, who bestowed upon him the same piety and glory. They had great wealth, glory and and many dignities, titles and privileges.[3]

Theodore spent most of his adult life serving in the Byzantine army. An energetic and valiant man, he had gained considerable fame as a gifted soldier, both courageous and cunning, with an outstanding record of success. It was reported that he rarely failed in any military task, and invariably got the better of his enemies. Already by 1067, when he commissioned a gospel preserved in St Petersburg, he had risen to the ranks of patrikios, topoteretes and hypatos.[4]

Theodore Gavras' crowning glory was the recapture of Trebizond from the Seljuk Turks in 1075. A Byzantine army under his command was dispatched in 1075 to Trebizond to drive the Turcomans out of Trebizond and the surrounding area, ultimately succeeding in recapturing the territories that had been lost.[5]

He returned to Constantinople after his victory, and was appointed by Emperor Alexios I Komnenos (1081-1118) as the governor of the Chaldia theme, which included Trebizond and the surrounding area.[5] Before returning to Trebizond however, he was obliged to leave his eldest son Gregory Gavras at the court with the sebastokrator Isaac Komnenos, to whose daughter Gregory was engaged.[note 2]

In Trebizond, Theodore Gavras acted quite independently of the Emperor and defended Neocaesarea (Niksar) and Koloneia (Şebinkarahisar) against the forces of Emir Danishmend Gazi (Ahmet Melik), extending the borders of Trebizond as far as the Bayburt region, and at the same time defending Trebizond from Georgian raids.[5]

In the region which stretched from Samsun to Chaldia (Gümüşhane) he had a number of castles built to form a defence system to keep the mountain passes leading to the coast under control, thus dominating the coast from Samsun to a point east of Trebizond.[5] 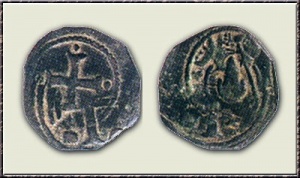 Bronze coin dating from the era of Theodore Gavras.

Soon after the death of his first wife Irene (the mother of Gregory, and possibly a Taronitissa), Theodore remarried, apparently in 1091, a "most noble" lady from "Alania", who was the first cousin of Isaac Komnenos' wife. According to Professor Cyril Toumanoff, the lady was the Georgian Bagratid princess Mariam, daughter of the Georgian king Bagrat IV and sister of the Byzantine princess Maria.[6] When this became known, the engagement between his son Gregory and the Komnenos daughter was broken off, as they were now considered close relatives and their marriage was prohibited by civil and ecclesiastic law. Alexios however was worried about Theodore’s reaction, so he continued to keep Gregory at the court as a hostage in order to ensure Theodore’s continued good behavior.

In 1091 Theodore returned to the capital and was demanding the return of his son. Alexios refused, claiming he was contemplating marrying the boy to one of his own daughters. Disbelieving the emperor, Theodore hatched a plot to rescue his son and get him to safety at Trebizond in secret. He initially agreed to hand over his son; then on the eve of his departure he had dinner with the Sebastokrator, with whom he was now related through his second marriage. He begged to be allowed a further twenty-four hours with his son, which Isaac agreed to. The next day, he asked if Gregory could accompany him on the first stage of his journey to Sosthenium, where he intended to pitch his camp. His minders agreed, but when Theodore then proposed that Gregory accompany him further, they initially said no, before Theodore managed to convince them. They made it to the port of Pharus when Theodore secretly boarded a merchant ship along with Gregory and fled onto the Euxine.

This stirred Alexios into action, and he sent a squadron of ships to overtake Theodore with orders to bring Gregory back to the capital. They overtook the ship near the town of Aeginus and advised Theodore that were he to refuse to hand over his son, he would be arrested as a rebel. Theodore, still distant from his seat of power and outnumbered, backed down and allowed Alexios’ emissaries to take Gregory back with them, while he continued on his way back to Trebizond. Gregory then formed another plot to escape but it too was discovered and he was imprisoned at Philippopolis for his troubles.

A man of Theodore’s military talents was too good to waste, and by 1097 he was once again at the front line, this time fighting the Turks as part of the initial alliance with the soldiers of the First Crusade.

While the Franks were engaged at the Siege of Antioch, Theodore was marching with Alexios and helping him recapture towns in western Asia Minor. He was prominent in the capture of Bayburt, once an important center on the ancient Silk Road, which was subsequently besieged by the Turks who hoped to reclaim it.

In 1098, in a campaign in the region of Theodosiopolis (on the bank of the Çoruh River near Bayburt),[5] he was captured and martyred by the Danishmends:[7][8]

"His captor tried, without success, to force the conversion of Gabras. Gabras was first layed out on the snow, face down, and beaten on the back. He remained steadfast, however, so his captors then proceeded to dismember him alive, severing his tongue, plucking out his eyes, and then removing his scalp, limbs, and other parts. His remains were burned and the Amir Ali had a golden drinking cup fashioned from his skull."[9]

Thus, Saint Theodore Gavras, the most glorious Great Martyr of Christ was martyred in the year of Our Lord's salvation 1098, on the second day of October, and was given by the Hand of the Lord a crown for the wondrous and amazing martyric struggle and death, fighting his intelligent and sensible enemies.[3]

His son Gregory (Taronites) succeeded him as the virtual governor of Trebizond (Doux of Chaldia) from ca.1103-1106.[5][note 2] His nephew Constantine Gavras was also appointed Doux of Chaldia by Emperor John II Komnenos (r. 1118–1143) arbout 1119, also ruling it practically independently from 1126 until 1140.

The honorable skull of St. Theodore Gavras was received by the tyrant Amir Ali (Amiralis, Amyrali), who fashioned it into a drinking cup, and covered it in a layer of gold in honor of the Martyr, and to remind himself of the saint's supernatural bravery which continued to amaze him.[3]

This all honorable relic performed many miracles and cured many people in Theodosiopolis, the city where the saint underwent his martyrdom.[3]

Afterwards, St. Theodore's skull was translated to Trebizond, the city of Protosebastor Constantine Gavras,[note 3] nephew of the Great Martyr, who was now ruler of the city. Protosebastor Constantine translated the skull to Trebizond with a great celebration and torchlight procession with great pomp and ceremony. The procession ended when the holy relic was placed in the Holy Monastery built by Constantine Gavras and dedicated to St. Theodore Gavras, where all could honor and venerate his relics.[3]