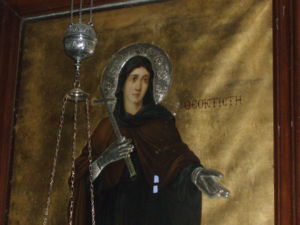 Icon of St. Theoctiste of Lesbos in the Church of Panagia Ekatontapyliani 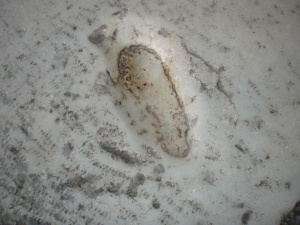 Miraculous footprint of the saint in the marble stone floor

Our venerable Mother Theoktiste of Lesbos, also known as Theoctiste of Paros, was a nun who led a solitary life on the island of Paros after escaping from pirates who had captured her. She is commemorated by the Church and Paros on November 9 and also on November 22.

What is known about St. Theoktiste is owed primarily to the prayer book written by St. Simeon Metaphrastes[1]. It recounts that Theoctiste lived during the 9th century and was born on the island of Mithimna, Lesbos. However, due to her association with the historical and archaeologically important Church of Panagia Ekatontapyliani - Hundred Doors (Paros), the "Parians" have her classified as one of their local saints. She was orphaned from a very young age and became a nun in her childhood and was raised in a monastery in Lesbos.

At around the time she reached the age of 18, pirates captured Theoktiste, along with other young women, on one of their raids of Lesbos. On their way to the coast of Africa, their ship anchored at the port of Naousa on Paros island. They let their captives land to get over their bout of sea-sickness and this is when Theoktiste managed to escape from her guards and got lost in the woods.[2] She wandered for many days and wound up at the temple of Ekatontapyliani.

At that time, the island was nearly deserted because the people could not bear the frequent raids made by the pirates. So, she took refuge in this temple for over 35 years. During this time she ate wild plants and drank Holy Water (which exists until this day under the Holy Table of the main temple).

At some point, some hunters from Evoia, visited the island of Paros to hunt in the woods. One of their dogs discovered the saint. She asked for a covering and then appeared before the hunter and narrated her life. She requested the hunter to return to Paros on his next journey and bring her Holy Communion. The following year, the hunter returned to the island with the Holy Communion. Before he was about to leave the island, he went to wish her well and found her dead. He buried her where the present chapel and tomb is.

There is a tradition that says that after seven years, the hunter returned again and took the holy relics with him, leaving behind only one bone which is now found in a chest near the chapel.