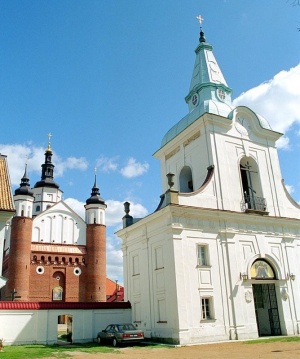 Supraśl Monastery
The Supraśl Monastery (Polish: Monaster Zwiastowania Najświętszej Marii Panny w Supraślu) in Supraśl, Poland, is one of six Orthodox monasteries for men in Poland. The monastery was founded in the sixteenth century and is also known as the Monastery of the Annunciation.

The monastery was founded by the Marshall of the Grand Duchy of Lithuania, Aleksander Chodkiewicz, under a special tomos issued by the Patriarch of Constantinople, Jeremias II Tranos. The original wooden Church of St. John the Evangelist on the monastery grounds was built in 1501. During the ensuing years, a number of other churches were built at the monastery. The Church of the Annunciation, built between 1503 and 1511, was consecrated in 1516, followed by the Church of the Resurrection of Our Lord. This church housed the monastery catacombs.

In time the monastery developed a large library and became prominent as a site of Orthodox culture, with contacts with other monasteries, such as the Lavra at Kiev and Mount Athos.

When the issue of the Union of Brest-Litovsk arose in the early seventeenth century, Supraśl Monastery, in 1609, was among the first communities in the Polish-Lithuanian Commonwealth to accept the union. Under the union the monastery was rebuilt. An expanded publishing house was established that published in Ruthenian, Polish, and Latin. Additionally, several filial monasteries were founded, including one in Warsaw that continues to exist to this day.

After the Third Partition of Poland in the late eighteenth century, the monastery was confiscated by Prussia in 1796. The monastery continued to have a religious role as the seat of the eparchy established by the Prussians in 1797 for the Ruthenians/Russians under Prussian rule. The area came under Russian rule after the Treaties of Tilsit in 1807. In 1824, the Russians placed the monastery under the Church of Russia. St. Panteleimon's Church was built in 1875 followed by the Church of St. John the Theologian in 1889. In 1901, the Church of St. George the Victor was built. In 1910 the frescoes from the sixteenth century were restored after having been covered up during the time the monastery was in the Unia.

The two world wars greatly disrupted the monastery. During World War I, the monks fled to the interior of Russia, taking the icon of Our Lady of Supraśl with them. Between the wars the monastery was occupied by the Latin Rite Salesian Order. Then, during World War II, the retreating German army destroyed the Church of the Annunciation, including its frescoes. Under the rule of the Communist government after the war the monastery was used as an agricultural academy.

With the collapse of the Communist government in the late twentieth century, the monastery was turned over to the Church of Poland, which began immediately to renovate and restore it.

Restoration of the major buildings of the Supraśl Lavra continues. The Church of the Annunciation, in the courtyard of the monastery complex, is in the process of being rebuilt according to the design of M. Kuzmienko. Other buildings in the monastery include the baroque buildings originally constructed in the seventeenth and eighteenth centuries and the Archimandrites' Palace, built between 1635 and 1655. The palace now houses the Supraśl Icon Museum. Additionally, there are the Church of St John the Theologian and the Gate-Belltower, built in 1752.