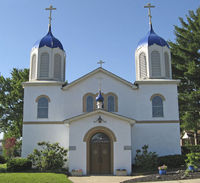 Ss. Peter and Paul Orthodox Church is a parish in the Diocese of Washington and New York of the Orthodox Church in America. It is located in Manville, New Jersey (approximately 45 miles southwest of New York City and 60 miles northeast of Philadelphia, Pennsylvania).

The parish was founded by a group of families of Russian descent in 1915 and originally held divine services in a building on the grounds of a lumber yard in Manville, New Jersey. In 1916, lots were purchased for the church and a wooden chapel was built by parishioners.

The church was consumed by fire in 1922 and 1935, but rebuilt by the parishioners each time. On June 6, 1936, the new (and current) building was consecrated by Metropolitan Theophilus. The church was damaged (but not destroyed) by fire again in 1962, but the damage was completely repaired by early 1963.

The church celebrated its Golden Jubilee in 1966, and on October 16 of that year Metropolitan Ireney presided over the Divine Liturgy. Protopresbyter Alexander Schmemann gave the address at the celebratory banquet.

During the 1970s, the ethnic character of the church broadened, as parishioners of various European (and American) backgrounds joined. Shortly after the OCA was granted autocephaly in 1970, the church adopted its current name of Ss. Peter and Paul Orthodox Church, dropping the "Russian" from the name. This was done not to slight the Russian parishioners who had contributed so much to the development of the church, but to recognize the increasingly American character of the church. Around this time, English became the dominant language for church services.

A number of improvements have been made to the church in recent years; the most recent being the painting of new ceiling icons.