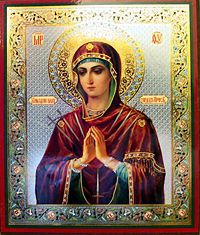 Given its likely point of origin - near Roman Catholic Poland - it is almost certainly an Orthodox adaptation of the Roman Catholic imagery contained in the Our Lady of Sorrows devotion.