St. Simon the Shoemaker (10th century A.D.), also known as Simon the Tanner (Sama'an el-Dabbagh in Arabic), is the Coptic Orthodox saint associated with the great miracle of moving the Mokattam (Muqattam) Mountain in Cairo, Egypt, during the ruling of the Muslim Fatimid Caliph Al-Muizz.

St. Simon the Tanner and the Miracle of Moving the Mountain 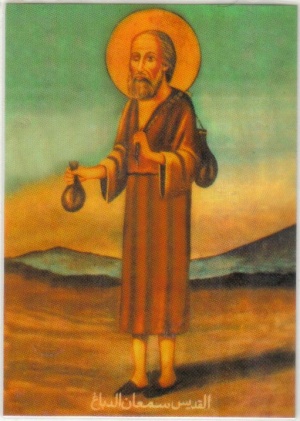 Coptic icon of St. Simon the Shoemaker (depicted as a one-eyed man carrying a sack of water, as he used - every morning before going to work - to carry water to the sick and the old who could not fetch water for themselves)
Saint Simon the Tanner lived towards the end of the tenth century when Egypt was ruled by the Fatimid Caliph Al-Muizz Li-Deenillah, and Abraam the Syrian was the 62nd Coptic Pope.

At the time, many Copts (Coptic Christians) in Egypt were engaged in handicrafts. Saint Simon worked in one of those crafts widespread in Babylon (Old Cairo) which was tanning, a craft still known there till this day.

This profession involved also other crafts that depend on the process, from where St. Simon carried several titles related to skins; Saint Simon the Tanner, the Cobbler, the Shoemaker.

The Caliph Al-Muizz used to invite different religious leaders to debate in his presence. In one of those meetings in which Pope Abraam and a Jew named Yaqub (Jacob) Ibn Yusuf Ibn Killis were present, the Pope got the upper hand in the debate. Plotting to take revenge, Ibn Killis quoted the verse where the Lord, Jesus Christ, said in Matthew 17:20: "If you have faith as small as a mustard seed, you can say to the mountain, Move from here to there, and it will move, nothing will be impossible for you" and demanded that the Pope proves that his religion is right by means of this.

The Caliph saw in this a unique opportunity and asked Pope Abraam to move the Mokattam Mountain. If they proved unable to do so, it would be the proof that the religion of the Christians was wrong and the Caliph would be done away with them completely.

And so, after three days of prayers and fasting by the Copts throughout Egypt, Pope Abraam was directed by the Holy Virgin Mary (in an apparition of her to him) to choose St. Simon to mediate for moving the Mokattam Mountain. On the set day, as the people, with St. Simon the Tanner among them, were saying Kyrie eleison (Lord have mercy), the mountain was thrusting up and down, and the sun could be seen from under it. After the miracle was performed in the presence of the Caliph, the Pope turned left and right looking for St. Simon the Tanner, but he had disappeared and no one could find him (a sign of the saint's deep humility).

The Caliph, shaking with fear, embraced the Pope warmly and this marked the beginning of a long friendship between the two. The Caliph asked the Pope to name his reward. After some hesitation, the Pope asked for permission to rebuild or renovate some churches, particularly that of St. Mercurius in Babylon. That church, which was partly destroyed, was being used as a sugar warehouse. The Caliph offered funds from the state treasury for the reconstruction of the church but Abraam turned him down. "He whose Church we are building does not need the money of this world and is capable of helping us until we finish the job," Abraam said.

The Pope also decreed that the three-day grace period which he had requested from the Caliph, and which he and the bishops and priests spent in prayer and fasting, be a regular period of fasting to be observed by all Copts every year. Those three days were added to the forty days of fasting before Christmas. Thus, the Coptic Orthodox Advent fasting became forty-three days starting on November 25 (as it is today).

Shortly after the miracle took place, Al-Muizz decided to convert to Christianity. A baptismal font, big enough for the immersion of a grown-up man, was built for him in St. Mercurius Church. This font continues to exist until the present day and is known as "Maamoudiat Al-Sultan" which means the baptistry of the Sultan.

The relics of St. Simon were discovered in 1991 in St. Mary's Coptic Orthodox church in Babylon, Old Cairo (known as the Hanging Church).

It is noteworthy that Bishop Sawirus ibn al-Muqaffa` was closely associated with both the Fatimid Caliph Al-Muizz Li-Deenillah and Pope Abraam (975-978 A.D.), and thus wrote with authority in his famous Coptic History of the Patriarchs about the Mokattam Mountain miracle as an eyewitness of it.