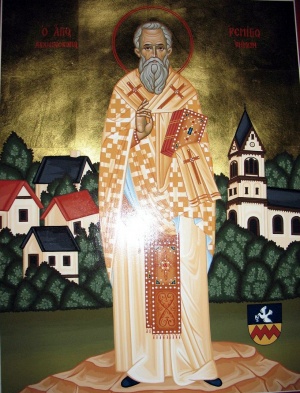 St. Remigius, Bishop of Rheims and Apostle of the Franks.

Our father among the saints Remigius of Rheims (French: Saint Rémi or Saint Rémy), Apostle to the Franks (437–533), was Bishop of Rheims from 459 to 533. During the seventy-four years that he was bishop he was the most influential prelate in Gaul, with the culminating event of his life, (according to Gregory of Tours),[note 1] being the baptism in 496 AD of Clovis, King of the Franks, and over 3000 of his warriors. This led to the conversion of the entire Frankish people to Nicene Christianity, and was a momentous success for the Orthodox Church as well as a seminal event in European history. His feast day is celebrated January 13, and the translation of his relics on October 1.

Remigius was born in 437, traditionally at Cerny-en-Laonnois, near Laon, Picardy, in northern Gaul, into the highest levels of Gallo-Roman society. He is said to have been the son of Emilius, count of Laon (who is not otherwise attested) and of Celina, daughter of the Bishop of Soissons, which Clovis had conquered in 486.

After studying at Reims for awhile, devoting himself to secular and sacred learning, he withdrew to a small house near Laon, to live in reclusion and prayer. However when a bishop was needed in Rheims, the clergy and people, having noted Remigius for his learning and sanctity, in addition to his high status, carried him off from his hermitage and made him their bishop in his twenty-second year, in 459 AD, though still a layman.

The holy bishop soon became renowned throughout northern Gaul. He converted heretics, brought Arian heretics back to the Orthodox Faith, and cared for the many who suffered at the hands of barbarian marauders. Wherever he went, miracles attended him. He healed the sick, and once, when a town was on fire, threw himself into the flames and quenched them. Birds would come to his table whenever he ate, and he would share his meal with them.


In 482 the young warrior Clovis became leader of the Frankish tribes in that region. Though he was a pagan, he knew and admired St. Remigius, and was married to a Christian, St. Clotilde (June 3). Once, when his army faced defeat by the Alemanii, Clovis prayed to "the God of Clotilde and Remigius" and won a great victory. This answer to his prayers convinced him of the truth of the Christian Faith, and he asked St. Remigius to instruct him. Two years later he gathered all his chieftains in Rheims to attend his baptism. The baptism was accompanied by many miracles, seen by all in attendance. Two of the king's sisters and three thousand of his lords and soldiers were baptized at the ceremony. This event is considered the birth of France as a Christian nation.[note 2]


St. Remigius also zealously opposed Arianism. Though Remigius never attended any of the church councils, in 517 he held a synod at Rheims, at which after a heated discussion he converted a bishop of Arian views.

In great old age, St Remigius went blind, but miraculously recovered his sight. He reposed in peace at the age of 105, immediately after serving the Divine Liturgy.

St. Remigius' relics were kept in the Cathedral of Rheims, from where the Archbishop Hincmar had them translated to Épernay during the Viking invasions and from there, in 1099 to the Abbey of Saint-Remi.