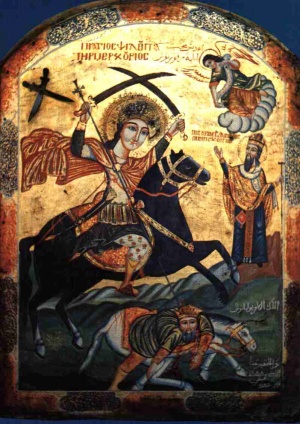 St. Mercurius was born around 225 A.D. in Cappadocia (Eastern Asia Minor). His parents were converts to Christianity and they called him "Philopater" or "Philopatyr" (a Greek name which means 'Lover of the Father'). They reared him in a Christian manner. When he grew to adulthood (at the age of 17), he enlisted in the Roman army during the days of Emperor Decius, the pagan. The Lord gave Philopater the strength and the courage, and he gained a great reputation among his superiors as a swordsman and a good tactician for many battles. They called him Mercurius and he grew very close to the Emperor.

When the Berbers rose up against the city, Decius went out to fight them, but when he saw how many they were, he became terrified. St. Mercurius assured him saying, "Do not be afraid, because God will destroy our enemies and will bring us victory." When he left the Emperor, an angel appeared to him in the shape of a human being, dressed in white apparel. The angel gave him a sword saying, "When you overcome your enemies, remember the Lord your God." (That is why he is called, 'of the two swords,' Abu-Saifain; one is the military sword and the other is the sword of the Divine power.)

When Emperor Decius conquered his enemies and Mercurius came back victorious, Mercurius was given the title 'Supreme Commander of all the Roman Armies' (in 250 A.D., at the age of 25), and the angel appeared to him and reminded him of what he told him previously, that is, to remember the Lord his God.

Decius, and his soldiers with him, wanted to offer up incense to his idols, but St. Mercurius tarried behind. When they informed the Emperor of what had happened, he called St. Mercurius and expressed his amazement at his abandoning of his loyalty to him. The Emperor reprimanded him for refusing to come and offer incense to the idols. The saint cast his girdle and his military attire down before the Emperor and said to him, "I do not worship anyone except my Lord and my God Jesus Christ." The Emperor became angry and ordered him to be beaten with whips and stalks.

When the Emperor saw how the people of the city and the soldiers were attached to St. Mercurius, the Emperor feared that they might revolt. So instead, he bound him in iron fetters and sent him to Caesarea where they cut off his head. He thus completed his holy fight and received the Crown of Life in the Kingdom of Heaven on 4 December 250 A.D.

After the end of the first persecution, God wanted to reveal the place of the saint's burial. Mercurius appeared to a poor man in the city, and told him that he was Mercurius the martyr of the Lord. "My body is buried in Cappadocia Gardens, under the old house on the way to the royal palace. My body looks as white as snow, because Jesus was present at the time of my martyrdom," said the saint.

The next morning, the man went to dig under that old house. Then he smelled perfume, and at the same time he saw the body of the saint. The news spread quickly and many people came to take a look at the blessed body. They moved it to the village's church until they built a new church bearing his name, and Mercurius' body was buried there with respect and devotion.

A few years later, the Armenian Catholicos visited Egypt and met with the Egyptian Patriarch. The latter asked him if Egypt could have part of the relics of Saint Mercurius to be placed in the church that bears his name in Old Cairo. On 9 Baounah (16 June) part of the blessed body was offered to Egypt.

Today, the saint's relics are preserved in the Coptic Orthodox church and convent named after him in Old Cairo, Egypt.

On 25 Abib, the Coptic Orthodox Church also celebrates the commemoration of the consecration of the first church named after the great St. Mercurius Abu Saifain.

Countless miracles occurred and continue to occur to this day through the intercession of St. Mercurius.