The church known as the New Church of St. Mary, the Mother of God (Theotokos) was one of the major building projects of the Emperor Justinian. It was his largest project in Jerusalem and was popularly known as the Nea, which means 'new' in Greek. The Nea was located on the eastern side of Jerusalem's main street called the Cardo Maximus, near the south end, in what is now the Jewish Quarter of Jerusalem. Only in recent times have the remains of this great church been uncovered by archaeologists.

The Nea was completed in 543 A.D. and its construction was noted in a book about the Justinian's building projects by the Byzantine historian Procopius. The church was designed by an architect from Constantinople named Theodoros. Justinian directed that the church was to be built on the highest hills of Jerusalem and specified it size. Due to the size of the church as specified by Justinian, it could not be built entirely on solid rock. Thus, the south-eastern part of the structure was placed on a built up arched foundation amongst which were constructed a series of cisterns. A tabula ansata (a handled writing tablet) found in one of the cisterns associated Emperor Flavius Justinianus (Justinian) with the project which it was also noted under the care of "…most holy Constantinus, Priest and Hegumen…," who was the abbot of the monastery. Procopius also noted the need to expand the building site as the site needed also to support the monastery, a hostel, and a hospital.

The church itself was described by Procopius as a basilica, with two, or perhaps four, side aisles. The length and width dimensions of the interior are about 110 m (360 ft) by 52 m (171 ft), with a central and two side aisle apses on the eastern end. The exterior length of the building is estimated as 116 m (382 ft). A narthex was located on the west end of the building which apparently opened to a small atrium that bordered the Cardo. With its large size the church rivaled in size the Church of the Holy Wisdom in Constantinople that was also built by Justinian. 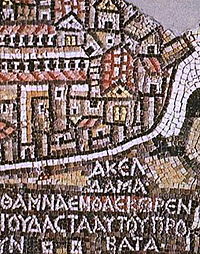 Nea Church as shown in the Madaba mosaic map.

The Church of the Holy Sepulchre, the other major church in Jerusalem at the time, was located further north along the Cardo on its other side. These two churches are displayed most prominently in the famous Madaba mosaic map of Jerusalem that was discovered in the ruins of a Byzantine church in Madaba, Jordan, in 1884. This map is the oldest pictoral view of Jerusalem and vividly shows the two churches between which processions were conducted.

The date of the destruction of the Nea Church is not known precisely. According to accounts preserved in The Capture of Jerusalem (Expugnationis Hierosolymae) the conquering Persians and their Jewish allies destroyed the church and killed the clergy in 614. The extent of the damage is unclear as Patriarch Sophronius delivered his Nativity sermon in the Nea Church in 634. Further damage to the church may have occurred from an earthquake in 746. In 808, a reference to the church appeared in the Commemoratorium de casis Dei and, in 870, it was mentioned by Bernard the Monk who stayed in a hospice next to the church. In the tenth century, Eutychius, the Melkite Patriarch of Alexandria, noted the Nea Church ruins. The damage by the Persians, in 614, may have been severe as the Persians may have searched for treasure believed stored within the church as speculated from Procopius' report of the Emperor Justinian sending sacred items to Jerusalem.[1]