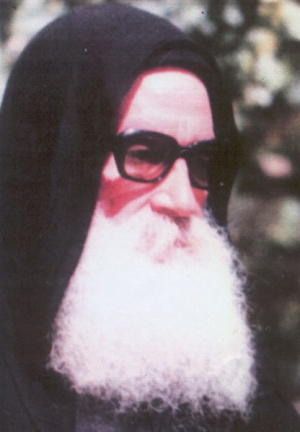 Father Matta El Meskeen (Maskeen or Meskine; translated as Matthew the Poor), born Youssef Eskander (September 20, 1919 - June 8, 2006), was a Coptic Orthodox monk and spiritual father of 130 monks in the Monastery of St. Macarius the Great at Scetis in Wadi Natrun, Egypt. He is considered by many to be a renowned Orthodox theologian, and was an author of voluminous texts on numerous topics, including biblical exegesis, ecclesiastical rites, and other spiritual and theological matters (181 books, besides hundreds of journal articles).

Father Matta is celebrated by many Copts as a reformer and a prominent figure in recent Coptic history. Following the repose of Pope Kyrillos VI in 1971, Father Matta and two others (Bishops Samuel[5] and Shenouda) were considered as candidates for the Patriarchal throne. Bishop Shenouda was chosen to be the Coptic Pope of Alexandria.

Father Matta and Pope Shenouda share some common history. Both participated in the Sunday school movement and Matta was Shenouda's confessor in the 1950s. Pope Shenouda acknowledges his debt to his teacher, Father Matta El-Meskeen, whom he calls 'my father monk' in the introduction to his book Intelaq Al-Rouh (The Release of the Spirit).[6],[7] (Father Matta was also the spiritual guide of the late Alexandrian priest Father Bishoy Kamel, a contemporary Coptic Orthodox saint.)

But more recently, some misunderstandings between both leaders and their followers[8],[9],[10],[11] have surfaced, e.g., recent discussions on the concept of theosis[12],[13],[14] and also the position Father Matta held on the sixteenth chapter of St. Mark's gospel. See: Web site by some of Fr. Matta's proponents, a detailed study about the Mark 16 controversy (Arabic), Pope Shenouda III's reply concerning the theological and dogmatic opinions of Fr. Matta: Part 1,Part 2 (Arabic RealAudio; recorded in 1991/2003 - zipped mirror), and HE Metropolitan Bishoy's lecture about Fr Matta: 4 parts zipped together (Arabic Audio; recorded on 18 September 2006).

Father Matta El Meskeen was born in Benha, elKaliobia, Egypt, in 1919. (One source says he was born in Damanhour, Egypt.[15]) In 1944, he graduated in Pharmacy from the University of Cairo. In 1948, after leading a successful life and establishing a wealthy lifestyle for himself--Eskander at the time was the owner of two pharmacies, two villas, and two cars--he renounced his material possessions, and entered the Monastery of St. Samuel the Confessor in Qualmun (roughly near Maghagha, Upper Egypt). In 1951, he was ordained a priest against his will.

In 1954 Pope Yusab II invited Abba Matta to serve as Patriarchal Vicar, and elevated him to the rank of hegumen. After holding this position for a little over a year, he returned to monastic life, first at Dayr al-Suryan, then at the Monastery of St Samuel.[16]

In 1960, after living for a few years in the Monastery of St. Samuel the Confessor, Matta decided to move out into Wadi al Rayyan in the late 1950s. There, he lived as a recluse in the spirit of the ancient Desert Fathers for twelve years. By 1960, seven other monks joined him. The community expanded to twelve by 1964. These twelve monks were sent by Pope Kyrillos VI to Wadi El Natroun in 1969 to develop the monastery of St. Macarius the Great. At that time only six elderly, frail fathers lived near the road between Cairo and Alexandria. Matta and his twelve companions cared for them while reconstructing the monastery. The administrative, agricultural, institutional, and printing/publishing developments at the renewed Monastery of St. Macarius the Great were staggering. But the spiritual revolution was much greater. By 1981 Matta had over eighty monks in the monastery.[17],[18] The monastery also finances services and projects for the poor, Muslims and Christians alike.[19]

A comprehensive bibliography of writings by and about of Fr Matta is maintained on the Archive of Contemporary Coptic Orthodox Theology: Bibliography of Fr Matthew in English Translation, Biographies and Academic Studies.