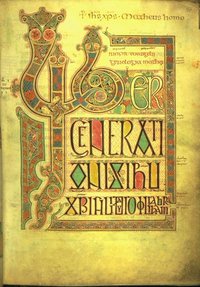 The Lindisfarne Gospels are an illustrated Latin edition of the Gospels. The manuscript was produced on Lindisfarne in Northumbria (northern England) in the late 7th century or early 8th century, and is generally regarded as the finest example of the kingdom's unique style of religious art, a style that combined Anglo-Saxon and Celtic themes.

The Lindisfarne Gospels are presumed to be the work of a monk named Eadfrith, who became Bishop of Lindisfarne in 698 and died in 721. Current scholarship indicates a date around 715, and it is believed they were produced in honour of St. Cuthbert of Lindisfarne. The Gospels are richly illustrated in the insular style, and were originally encased in a fine leather binding covered with jewels and metals made by Billfrith the Anchorite in the 8th century. During the Viking raids on Lindisfarne, however, this cover was lost, and a replacement made in 1852.

The text is written in insular script and along with the illumination is very much reminiscent of the Book of Kells, an earlier Gospels book in the same tradition probably made on Iona. The monastery at Lindisfarne had been founded by monks from Iona, and so it is understandable that these two treasures of the ancient British church should be so similar.

In the 10th century an Old English translation of the Gospels was made, a word-for-word gloss inserted between the lines of the Latin text by Aldred, Provost of Chester-le-Street. This is one of the first translations of the Gospels into the English language.

The Gospels were acquired in the early 17th century by Sir Robert Cotton from Robert Bowyer, Clerk of the Parliaments. Cotton's library came to the British Museum in the 18th century, and from there to the British Library in London. There exists a campaign in Northumbria to have the Gospels brought back to their place of origin.