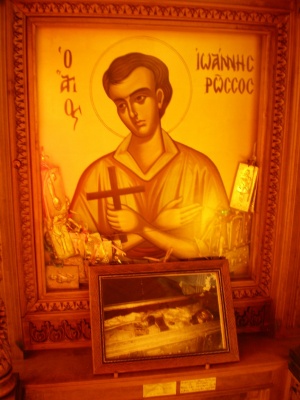 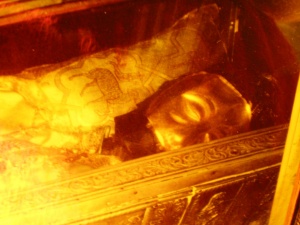 Close up of the saint's relics

The blessed John the Russian (1690-1730) was enslaved by the Turks, but lived his life in holy humility and miracles. His feast day is commemorated by the Church on May 27.

St John was born around 1690 in the south of Russia to pious Orthodox parents. Upon reaching maturity he was called to service in the army of Peter I, to serve as a simple soldier. During the Prutsk campaign of the Russo-Turkish war he was taken prisoner. As the case then, he ended up as a slave of the Turkish cavalry commander who took John to his home in the village of Prokopion, near Caesarea in Asia Minor.

Like all captured Christian soldiers, John was threatened, tortured, subjected to all means to convert him to the Moslem faith. John was resolute in his resistance to this inhumane treatment, bravely enduring humiliations and beatings. Noting John’s firm faith, his master’s heart softened and John was assigned to take care of his master’s stable, which also became his living quarters. Recalling the cave and manger where his Savior came into the world, John rejoiced in his small dark corner of the stable as a little paradise where he could freely pray and offer praises to the true God. Occasionally, John would leave his bed to keep vigil at the nearby Church of the Great Martyr George, and on Saturdays and Feast days receive Holy Communion.

As the cavalry commander prospered, he understood his blessings and prosperity came through his servant John, and noted this to his fellow citizens.

Foreseeing his end, John called for a priest from the church he had attended and asked to partake of the immaculate mysteries. The priest was afraid to openly bring the Eucharist into the stable. Being divinely inspired, he dug the core out of an apple and lined the cavity with beeswax and placed the communion inside. He then visited the saint at the stables and gave him Communion. After receiving communion, John fell asleep in the Lord on May 27, 1730. He was about forty years old.[1]

His relics were brought from the village of Prokopion to Euboea by refugees from Ürgüp in Cappadocia, after the Asia Minor Disaster of 1922-24. For several decades the relics were in the church of Ss. Constantine and Helen at New Prokopion, Euboia, and in 1951 they were transferred to a new church dedicated to St John the Russian (within the new Monastery of Saint John the Russian). St. John's body is small, and he is clothed in a garment similar to an altar server. His face is dark and is covered by a gold mask; one of his exposed hands is also quite dark. Thousands of pilgrims flock here from all the corners of Greece, particularly on his feast day (May 27).

St. John the Russian is widely venerated on Mount Athos, particularly in the Russian monastery of St. Panteleimon.

He that hath called thee from earth unto the heavenly abodes doth even after thy death keep thy body unharmed, O righteous one; for thou wast carried off as a prisoner into Asia wherein also, O John, thou didst win Christ as thy friend. Wherefore do thou beseech him that our souls be saved.

Images from St. John the Russian monastery and his relics